Here is a recipe for Balkan minced meat dumplings, a Balkan version of ravioli and manti dumplings.

Today I am bringing you a recipe for something very special - Balkan traditional dumplings called klepe. Klepe, like ravioli, can be filled with cheese but the most basic recipe usually calls for the meat stuffing. My grandmother made great klepe dumplings, but since she hasn't been with us for more than a decade I went to someone who makes them just as good, Ms. Ifeta.

P.S. Want more recipes with dough and stuffing that use similar techniques like Balkan dumplings klepe? Traditional pita (Balkan pie) is one, and this recipe has step by step instructions for dough (jufka) making. Sarajevo pizza is another way to practice your dough making skills, as are different breads and pastries.

Klepe are not the easiest to make, however, just like ajvar (ajver), they're well worth the invested time.

P.S. If you're not using a ravioli stamp, here is the link to how to make the dumplings with a fork and a glass. 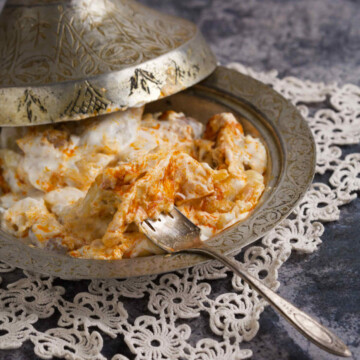 Dough rules: Too sticky add more flour. Too hard add more water. When rolling out the dough make the circles right next to each other as to use up as much dough as possible.
Tried this recipe?Let us know how it was!
« Potato Stuffed Peppers
How To Make Homemade Phyllo (Jufka) And A Potato Pie Recipe (Krompiruša) »