Classic Balkan baked stuffed peppers with a ground beef and rice filling. These flavorful stuffed capsicum (bell or other sweet peppers), filled and then roasted on a bed of tomatoes, will delight your every sense. Shall we? 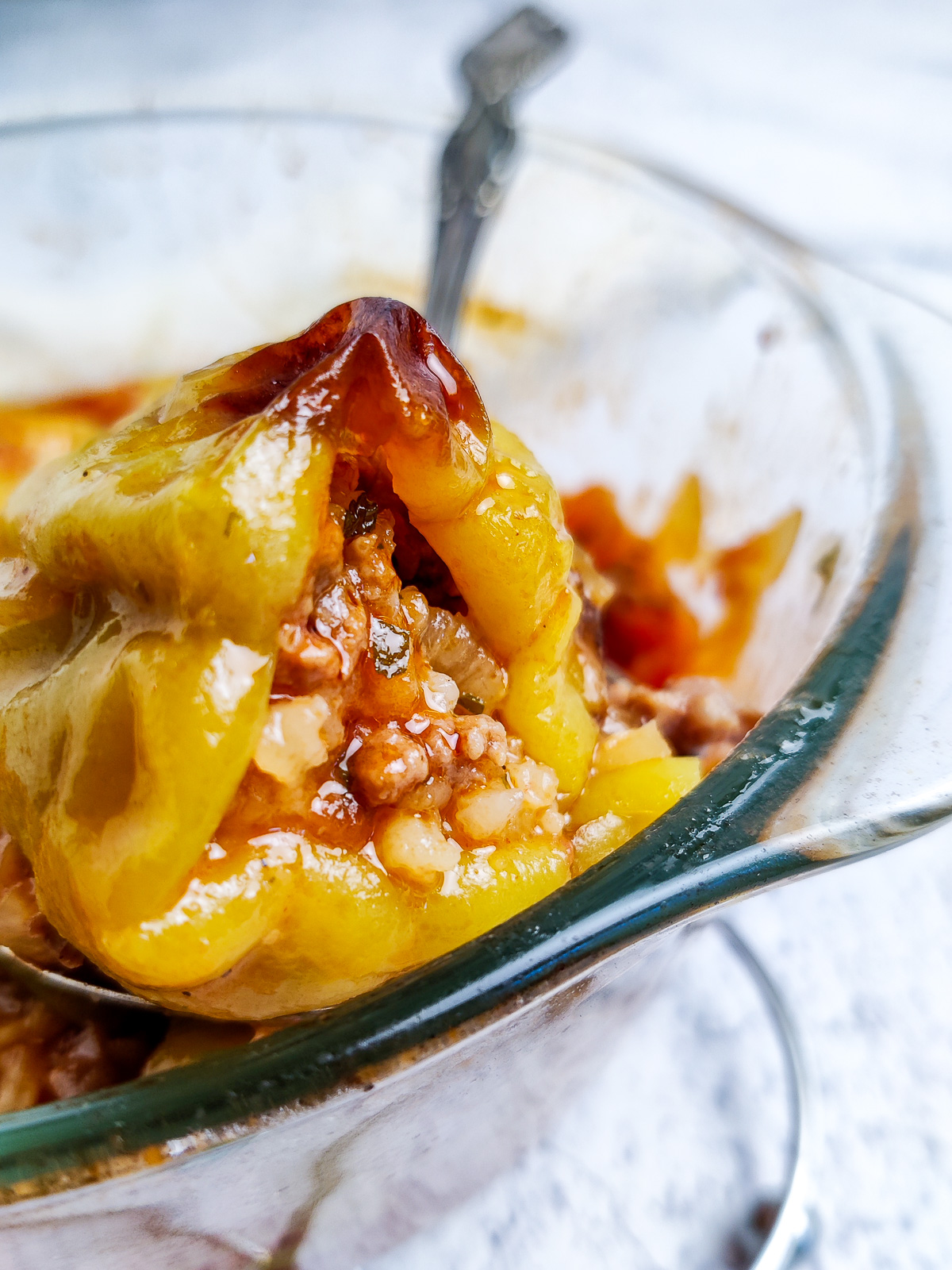 Stuffed peppers in the Balkans

Although there are several dishes based on stuffed vegetables in the Balkans, classic stuffed peppers are everyone’s favorite by far.

You see, stuffed peppers are a true comfort food, especially during cold months. There is nothing quite as nourishing as a few of them sitting in their juices on a plate, a dollop of sour cream on top, and a slice of homemade bread on the side.

Variations exist, but the basic stuffing for Balkan stuffed peppers is a mix of rice, ground beef and seasonings. Except maybe the peppers, you probably have everything you need for this dish in your pantry right now.

Some stuffed peppers are cooked, but for today I decided to go with our grandma’s oven baked stuffed peppers. I love this version because baking gives them a deeper, richer taste. Peppers soften and exude their juice, while the stuffing bursts out with flavor.

I promise you, old fashioned stuffed peppers are ten times better coming out of the oven than off the stovetop.

Which peppers to stuff? Which rice to use?

In the region, a special kind of pepper called “paprika babura” is usually used for this stuffed peppers with ground beef and rice.  (Check Cristina F1 and Blanchina F1.) These peppers are very similar to Hungarian sweet yellow peppers, or sweet alma chilies.

Baburas are yellowish green and range from just a bit spicy to sweet. They resemble a thinner version of bell peppers. The thickness of their pepper meat is leaner also.

(Quick note: never stuff red peppers (“roge” or devil’s horn peppers) used for ajvar with ground beef and rice stuffing. They’re too sweet for this dish, and too thin to stuff.)

If you live in the US bell peppers are probably the closest you’ll come to good peppers for stuffing. If able to, choose only the yellow ones as they have just the right amount of sweetness. Green bell peppers are sour, while reds are too sweet.

Finally, look for peppers that are on the smaller side. Think the size of a small, organic apple.

As far as rice, use the short, round grain rice such as Arborio. Long grain rice is too dry for this type of stuffing. 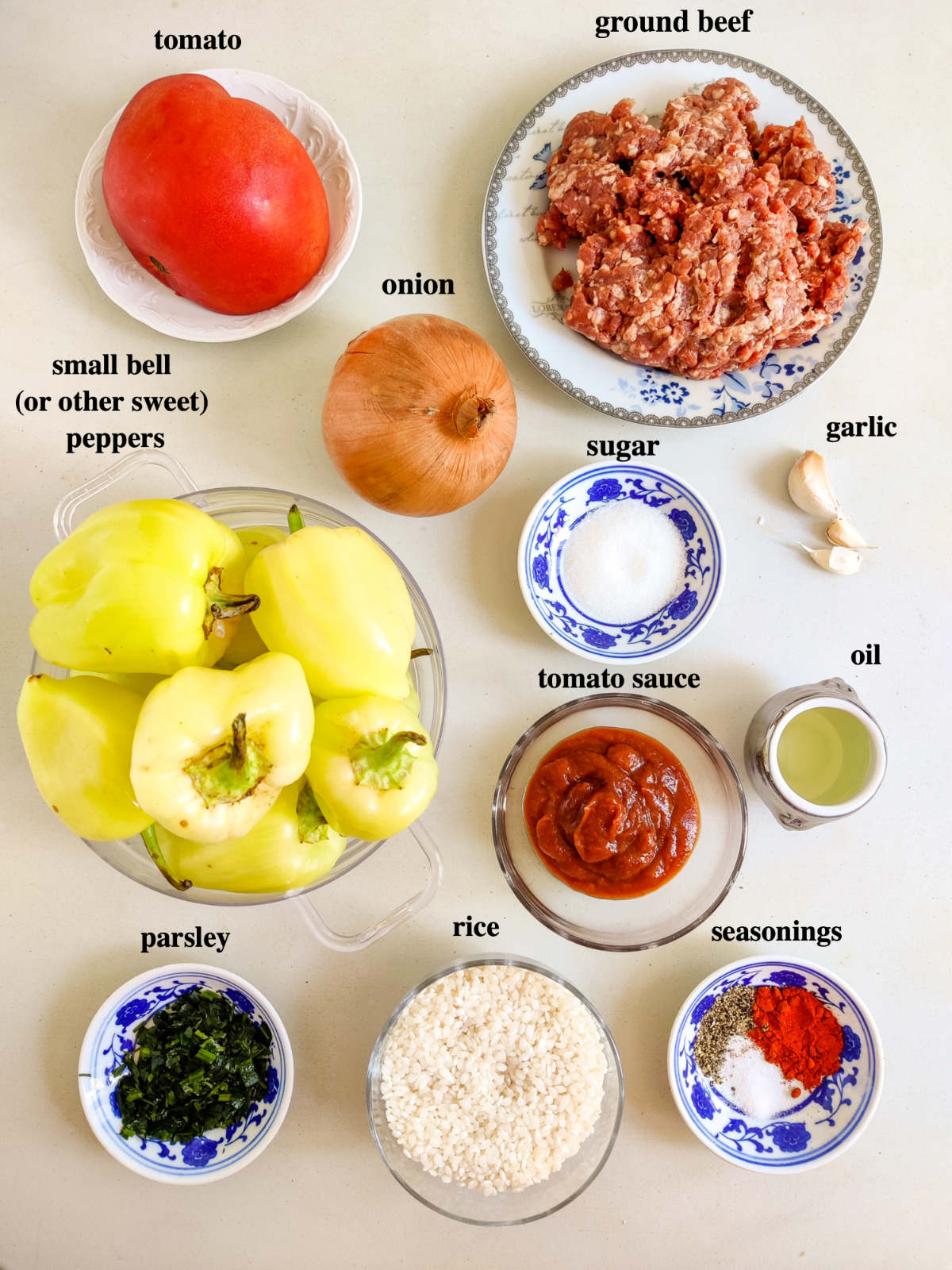 Please note that classic stuffed peppers are a dish for which we recommend you use the ingredients listed above (except these specific peppers which you may not have in your store). The dish changes in flavor greatly with each substitution.

Peppers: sub with bell peppers, but use only yellow or red. Green are too sour for this dish.

Rice: Sub with quinoa or ground cauliflower. If using rice, only use round grain rice such as Arborio.

Serving: Serve warm. For an extra kick add a side of mashed potatoes.

Storing: Store in the fridge 24 hours. Do not freeze. 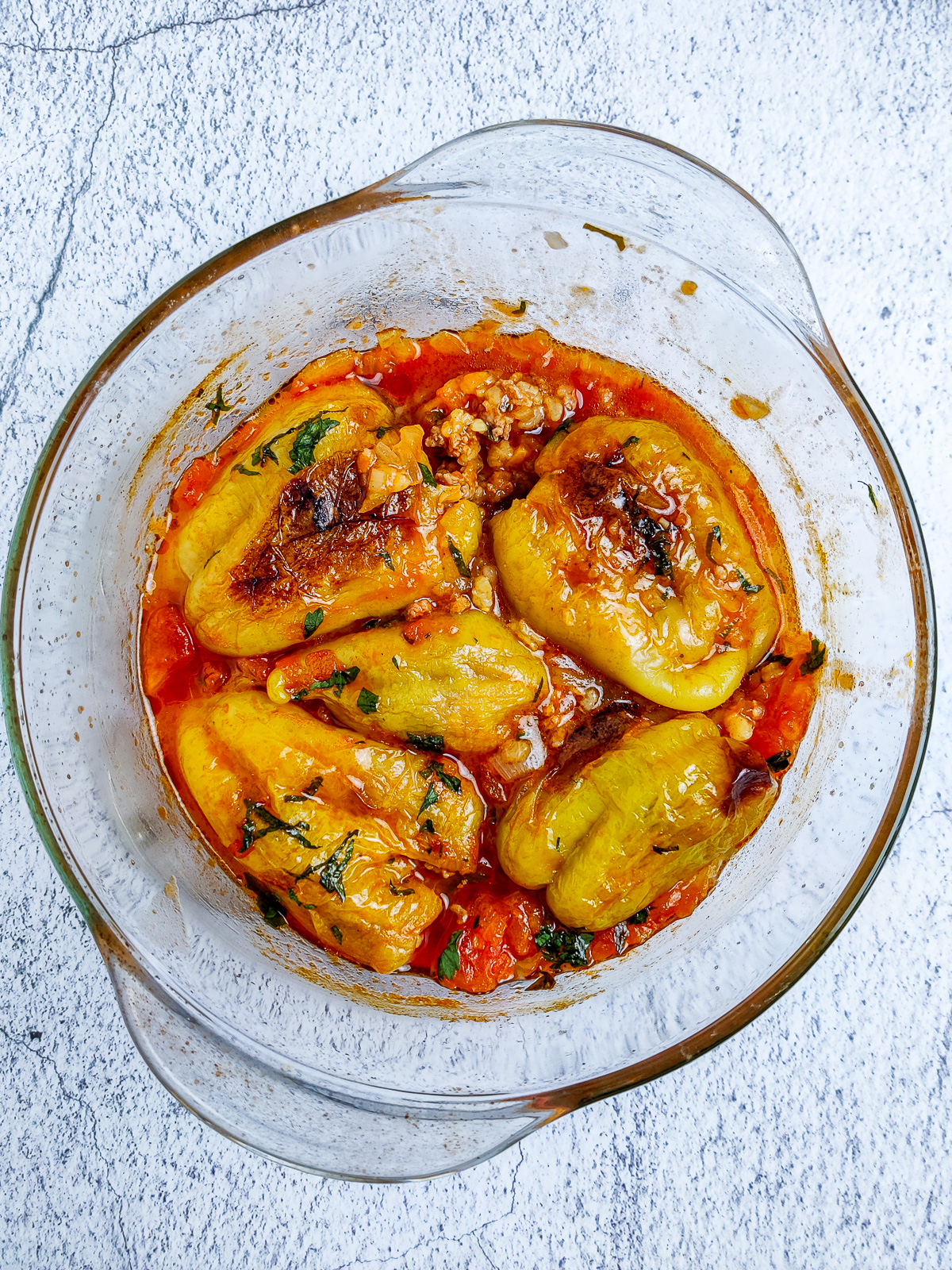 Would you do me a favor? If you make this best classic stuffed peppers leave a rating, comment or tag @balkanlunchbox on IG. (P.S. I read every comment!) Prijatno (aka bon appetit)!

Music for the video was kindly provided by Croatian band Dječaci (www.djecaci.net).

Step 7: Peppers are done when their skin is soft and a little bit shriveled and the sauce is thicker.