Looking for the best ajvar recipe? You're in luck! Today we're spilling ALL the secrets for this amazing Balkan "vegetable caviar" made with sweet red peppers and eggplant. (We're talking generations' worth of tips and techniques.) Shall we?

This ajvar recipe is detailed. For best results, read all of it.

Making ajvar requires effort and love. The method is simple. But the process is lenghty.

So, this isn't an "easy ajvar" recipe. There is no easy ajvar, fast ajvar, or ajvar made in small quantities. (We're looking at you NYT!)

Before running out to buy peppers, think about whether you can set aside 2 days, and get 2-3 people to help you. As an example, you'd roast vegetables on Friday afternoon, and do the rest on Saturday.

It sounds effortless, right? By now you're probably thinking about whether you can swing this ajvar recipe by yourself, in one day.

If you start early. If you have all the ingredients and equipment ready. If you have ZERO other obligations. And if everything goes according to plan.

But we don't want you to hate your life!

Keeping that in mind, it's perfectly OK to decide that making ajvar isn't for you! There are many easy recipes here you can do instead.

We didn't scare you off? Fantastic! You're in for a treat of a lifetime.

Get your team ready, and let's go!

For you, we're sharing our family ajvar recipe, and revealing secrets collected over generations. We've done extensive research too, so expect tips and techniques from folks all over ex-Yugoslavia, who have made ajvar more times than you can count!

Without false modesty, here on Balkan Lunch Box we've got

ajvar recipe in English on the internet!

So if you'll take this journey with us, we've got you covered!

Come September, Balkan homes are filled with the aroma of freshly made ajvar. Traditionally, ajvar was a part of zimnica, (food prepped for the winter; preserves and fermented foods et al.), but today it's consumed all year long.

Pronounced "aye-vahr" (from Turkish havyar, or caviar), the closest we can come to defining ajvar is as a spread made with roasted red peppers and eggplants, plus a couple of other ingredients.

It's hard to categorize it! Ajvar is considered a spread, relish, garnish, meza, condiment, sauce, paste, dressing, dip, preserve, chutney, and/ or salsa.

Regardless, ajvar has been made in almost every Balkan country for generations now.

(Below are ajvar recipe generalizations. Details vary from region to region.)

The main ajvar ingredient is the sweet red pepper.

The absolute best peppers for ajvar come from North Serbia and Macedonia. This is the reason pepper-only ajvar was considered the only "true ajvar recipe" for a long time.

However, today people have moved away from this line of thinking. Most make ajvar based on their taste preferences. Adding eggplants to peppers seems to be a favorite choice.

While ajvar ingredients can vary, ajvar preparation steps are something everyone agrees on. The ingredients must be both: roasted AND cooked.

(A quick note: there is another type of "baked ajvar" or pečeni ajvar, where cooking is skipped and ajvar is instead baked, but that's a recipe for another day.)

Today's ajvar recipe includes both eggplant and peppers that are roasted and then cooked.

Why is our ajvar recipe with eggplants?

The eggplant seamlessly combines with the pepper to bring a deeper, softer dimension to this dish. It results in ajvar with a sweeter taste and smoother consistency.

Our family's been making it the same way for generations, and it's one of the recipes we're most proud of on this blog.

We've split the ingredients for our ajvar recipe into two categories. The main ingredients are absolutely necessary. Optional ingredients are examples of what else is or can be used, and are as such, optional.

There are several steps to making this ajvar recipe.

1. Prep your oven with foil. Wash peppers and eggplant thoroughly. Pat dry. (Some remove the stem and seeds right away. We do it later.)

2. Roast peppers and eggplant on all sides, in batches.

4. Peel the eggplant but leave the seeds in. Transfer to a deep container.

6. Grind the vegetables in a meat grinder, a food processor, or chop them manually. (Set the liquids that were in containers aside.) Keep ground eggplant and peppers separate.

7. Fill your cooking pot with oil the thickness of a finger. Heat it up. Add eggplant and eggplant liquid to the pot. Stir and cook it for 20 minutes.

8. Bring the temperature down and add peppers and pepper liquid to the pot. stir

9. Add a little bit of oil every 15 minutes. Stir continuously.

12. Wear mittens (we didn’t) and use a ladle to transfer ajvar to jars slowly. Push all the air bubbles out with a spoon.

13. (Not pictured): Place all jars on a baking tray and return to the turned-off oven. Leave overnight until crusts form on top of each ajvar jar.

14. Pour a spoonful or two of oil on top of the crusts and close the lids tightly.

Handling: Keep unopened ajvar in a dark, cool place for up to 4 months. Once you open an ajvar jar, keep it in the fridge for 7-10 days. If you see whiteish or green spots on top, discard the jar.

Serving: When ready to eat, open the jar, empty the oil on top, give the ajvar a good stir with a spoon, then serve. If you're a garlic fan, add it in when you serve your ajvar, otherwise, your ajvar will last a shorter period of time.

What do you eat ajvar with?

Anything and everything! Ajvar goes great over bread, crackers, and pastries, it's a fantastic dip for your veggies, it can be your side or a salad dressing, a perfect addition to your meza, and it's often a base for different sauces. (In fact, there aren't many things you cannot eat ajvar with!)

Do you eat ajvar hot or cold?

Usually cold, or room temperature. However, there are dishes that use ajvar as a base, and in this case, you'd eat it warm.

How do you store ajvar?

Store unopened ajvar in a dark and cool place. Once you open a jar of ajvar keep it in the fridge for 7-10 days.

How long does ajvar last?

Unopened ajvar in a jar can last for up to about 4 months. Once the jar is opened, it needs to be refrigerated and consumed within 7-10 days. If you notice green or whiteish spots on top of ajvar, discard it.

No. Some people add vinegar to ajvar to give it a touch of sour, however, ajvar should never be bitter.

Similar but not the same. It varies greatly from region to region. Pindjur generally has tomatoes, while lutenitsa (lutenica) is a sort of really hot ajvar.

Is it safe to sterilize jars in the oven?

Our family has been sterilizing jars in the oven for preserves and ajvar for decades. We've never had any problems! However, we don't take any responsibility for your actions! If you're unsure what to do, follow the FDA guidance.

How do I know when the ajvar is finished cooking?

When it absorbs the oil and becomes creamy but thicker indicating what needed to evaporate has evaporated and the vegetables have combined perfectly. The color is going to be deeper orange to red (watch that it doesn't go too much toward brown, this means it's burning). Also, when you taste it, you'll know it's done.

If you made Ajvar and liked it, please consider giving it a ⭐️⭐️⭐️⭐️⭐️ (5-star) rating. This helps others find the recipe more easily! 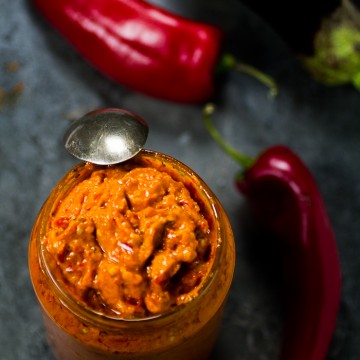 Stove: if using a gas stove, turn to the lowest setting. Ajvar will be done quicker than on other stoves, but you MUST stir it even more frequently.  Meat grinder or food processor: if you are adventurous, the best ajvar vegetables are actually finely chopped with a regular knife. Most don't do this because it adds more time to an already long process. The second best way to cut them is with a vintage meat grinder, and food processor if you must. If you use a food processor, think of processing veggies down to a chunky salsa consistency, not hummus! The original recipe calls for 22 lbs of bull's horn peppers to 7 lbs of eggplant (10kg peppers, 3kg eggplant). We buy more ingredients because you never know if the peppers will be easy to peel. Some aren’t, and you lose a portion of them because they're too thin, or are simply not the best peppers for ajvar. Even within bull’s horn peppers, it is hard to determine which batch of peppers will be good.  Step 1: if using a wood stove, heat it up high. Although you can remove stems and seeds before you roast peppers, we prefer to do it later. If using a regular oven, you can roast veggies on pan sheets in the oven instead of oven racks. (We place peppers directly on racks as more peppers fit this way.) If you opt for pan sheets it's still a good idea to cover them in foil or baking paper for easier cleaning.
Step 2:
our roasting temperature is only a suggestion; roast them at whatever temperature works for your oven. Total roasting time depends on your oven. ALWAYS go by your oven and visible signs that the vegetables are done, rather than an exact time. All batches after the first batch usually take less time. Re: bags, placing the peppers in the bags will allow for the steam to raise the skin off the peppers, and will make peeling infinitely easier.  Step 6: you don't necessarily need anyone to help you with roasting. Although long, that part is easy. (If you have someone who is willing to roast some of the veggies at their own house, and bring it over, even better!)  Peeling vegetables, however, is the time to get everyone else involved. Trust us, do not attempt to do this by yourself!  Step 7: peeling is the first reason why we always get more ingredients than necessary. You'll lose a small volume of peppers almost every time. Another important thing to remember is to remove as many seeds as you can. Also, some ajvar recipes call for placing vegetables in a colander or a strainer after peeling them, so they're drier for grinding and cooking. However, we find that the extra juices really add to that perfect ajvar flavor.  Stirring: the second reason you need people with you when cooking ajvar. It needs to be continuously stirred so it doesn't burn. If you mess up this step all of your efforts will be wasted. If ajvar burns even a little bit at the bottom the entire batch is ruined. You can divide the time so everyone stirs for ½ hour. (We have an annoying timer on in case we get to talking and forget about stirring 😂.) Doubling down: for a larger batch, double the ingredients. It'll take a little bit longer during peeling and roasting, but the cooking process stays the same. Warning: keep kids away from the kitchen while cooking ajvar. The ingredients are essentially boiling the entire time.
Tried this recipe?Let us know how it was!