Flawlessly roasted, tender red bull's horn peppers in heavy cream-plus-cheese white sauce... This peppers sauce recipe is achieved by first roasting peppers (you can use bell peppers instead of Italian bull horn peppers) to a soft perfection, and then simmered in heavy cream, garlic and cheese. Does there exist a more perfect side dish?

A couple of nights ago I had these Roasted Red Peppers in White Sauce for dinner. Sure, these bull's horn peppers (you can easily exchange them with red bell peppers) in cheese and heavy cream are just a simple and easy, vegetarian side dish. (Relatively fast to make too if you don't count the time it takes to roast the peppers. Although roasting takes only 20-25 minutes anyway.)

But to me this peppers sauce was creamy enough, cheesy enough, and hearty enough to become my entire meal that night.

Aleksandra got the recipe from one of her friend's. She wanted all of us to try it out. Unfortunately for everyone else, I was the fastest. Before they could sit down and get a plate, my darling family had the pleasure of watching me slurp up most of the cheesy and creamy white sauce, and the softest, reddest, most tender bulls horn peppers you can imagine. Like I said, just make this a red bell peppers recipe if you can't find these pointy, long, sweet ones from Italy and the Balkans.

These roasted red peppers in white sauce are a sum of straightforward steps and tastes. It was immediately obvious it didn't need a second, or a third preparation to deserve being on the blog.

Let's get back to why.

Firstly because of roasted peppers. As long as you pay attention to them while roasting, bull's horn and bell peppers come out perfectly each time. Hike up the temperature (I go as high as 485°f/ 250°c, but watch you oven), and pay attention to them. Flip them around halfway through. They should be perfectly roasted in about 20 to 25 minutes. You'll notice a few black char blotches on the skin. The skin will wrinkle up and rise in certain spots. Take them out and leave to cool down for 10-20 minutes, and then peel. (Like mentioned, to get peel roasted red peppers you can even place them in a bag and close it for 10-15 minutes. This makes peeling easier.)

If you've been to this blog at least once, you'll recognize these red peppers have a special place on here. They're all over the blog. They're in ajvar, that famous Balkan spread  you fall in love with if you taste it even once. (Seriously, I have never met a person who knew about ajvar and did not love it. Not like it. Love it!) There is a similar tomato and pepper spread known as pindjur. One could argue it's as good as ajvar itself.

But sometimes, I like red peppers just like that, roasted, dipped in olive oil, sprinkled with a little garlic.

Secondly, there is something about this pepper white sauce.

I've done several heavy cream inspired sauces on the blog. You may remember the very simple pasta with veggies in white sauce. Most of the base for this sauce was heavy cream along with basic seasonings. Heavy cream really lays on the thickness, and makes even the most boring of veggies taste deeper and more flavorful. Those of you who are a little bit more meat oriented may remember the typical Balkan meatballs in, yet again, heavy cream based white sauce. In short, I had enough experience with this type of sauce to know it would bring a deeper dimension to regular roasted peppers.

So combine the first with the second, add a little bit of cheese, and does it get any better? 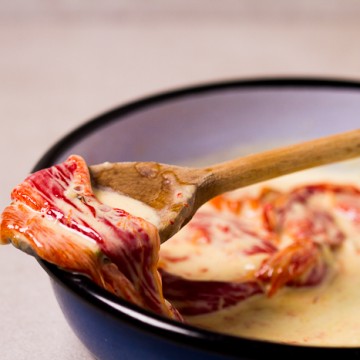 Tried this recipe?Let us know how it was!
« Balkan Veal Pâté (Teleća Pašteta)
Frozen Mixed Vegetables with Creamy Chicken and Edam Cheese »