Pindjur is a luscious salsa-like spread made by roasting tomatoes and peppers, and then simmering them over medium heat with herbs and garlic.

If you'd asked me what pindjur was a few years ago, I'd vaguely remember it was a spread something like ajvar, but not ajvar. (Ajvar is the famous Balkan roasted eggplant and red pepper spread.) The story would end there.

In the realm of spreads made with peppers, I'm a stickler for ajvar. Not every ajvar either. I only eat my mom's. (Here's her recipe if you'd like to try it out. And also the easier version.)

You think kids are picky? My obsession with mom's ajvar is so deep I often lie I'm allergic to peppers when someone else offers me the ajvar they made.

Call me a snob. But I've tried enough ajvars in my life to know exactly the proportion of eggplant to peppers I love. There is also my disdain for ajvar made with garlic, so that deletes most of them from competition. Finally, a perfect ajvar has to be just the right balance of sweet and savory. Just one additional step in either direction ruins the whole thing.

So to think I'd like pindjur (pin-jooh-r) was incredulous. It never crossed my radar that an ajvar-like substance (minus eggplant, plus tomatoes and garlic) would leave me so... satisfied.

You may remember Ms. Ifeta from the minced meat dumplings recipe. She's hard to forget. She invited me to make pindjur with her one Monday morning at 9am.

These days, it's this sort of thing that makes me giddy.

Here I was, going to my mom's friend to learn how to make a roasted tomato and pepper spread, at 9am on a Monday morning. These mornings make the previous decade and a half - year after year I went into work without any vision, meaning, or satisfaction - completely worth it. (You got me, this is totally a pitch to go work for yourself if at all possible.)

I was way behind Ms. Ifeta in productivity though. That Monday morning she'd already been to the doctor's, and had roasted the first batch of peppers and all the tomatoes by the time I arrived.

The rest of the process took another couple of hours. Like ajvar, pindjur also requires that time be put in to make it. The difference in these two, besides the ingredient swap, is that pindjur is more dip-like. Salsa-like. Ajvar is completely ground down, and simmered for a lot longer. It's definitely a spread.

Pindjur is chunkier, thicker, redder. Pindjur requires you to really bite into it, to slurp those chunks of peppers and garlic. You cannot eat pindjur without it getting on your hands, chin or the table. Pindjur has the sweetness of ajvar, but it's a more acidic. Acidic in the right way. Can you conjure up the taste of salt and vinegar chips in your mind? That's the kind.

You won't regret either.

My recommendation though? Make both. Suffer for a weekend or two, and have an entire winter worth of dips and spreads worthy of kings. 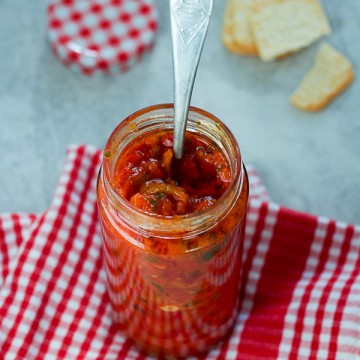 Like for ajvar, wear a pair of latex gloves when making pindjur.
As you've noticed, I was not overly precise with the total time needed to make pindjur, as well as the number of jars you'll need. The process takes about 3 hours (maybe a little bit more if you're making it for the first time), but this greatly depends on the type of oven you are using, and if you're roasting peppers and tomatoes in more than one batch. The same with jars - I cannot tell you about the volume due to the jars we used having been of different shapes and sizes. As with ajvar, I like to use small jars for pindjur. This way everything is consumed when the jar is opened.
Tried this recipe?Let us know how it was!
« Meaty Minestrone Soup: Vegetable Soup with Ground Beef
Turšija: A Guide To Fermenting Salad Veggies »