First of all, don't run away!

Secondly, if this is your first time making phyllo for pies, read my earlier how to make jufka article. It has good instructions and a bunch of helpful tips.

You don't have to, of course. But reading both will make it easier to make homemade filo and today's burek, or mixed pie with meat and potatoes.

But what if you came here for the short - albeit homemade - filo instructions?

What do you need to make homemade filo?

(Bonus ingredient? A little bit of patience. Or a lot.)

Thirdly - jufka, kore, filo and phyllo- all mean the same thing: dough stretched out until it's thin.

Scrumptious, flaky and stuffed Balkan pies (balkanske pite) are the definition of comfort food. As comforting as a good rack of BBQ ribs for some, or a thick tomato soup plus a grilled cheese for others.

There are many different types of pies. This one is called šareni burek, which translates to "colorful meat pie." To simplify the name I named it mixed burek.

(It's fun having a blog with cuisine most people aren't familiar with. I get to rename dishes in English for the first time!)

If you've read the article mentioned above, you're now aware of the Balkan "burek" wars. Burek is a contentious word across the region.

"Burek" comes from the  Turkish word "börek." (After all, burek is an Ottoman dish.)  "Börek" is the catchall name for most pies. All baked filo pastries with a filling are considered "börek" in Turkey. And the rest of Balkans.

In BiH, the only pie considered to be burek is the meat filled pie.

(Except one other pie, today's šareni (mixed) burek. It's the potatoes that make it "colorful." Otherwise, burek is the pie with meat.)

Also, in BiH every other pie has a name based on its filling. Cheese pie would not be "burek with cheese" in Bosnia. Instead it's "sirnica" as "sir" means "cheese." Meanwhile, "krompiruša" is the potato pie, as "krompir," you guessed it, translates to "potato."

Even if it's etymologically faulty, being from Sarajevo I'm on the side of burek being the meat pie only.

But I don't care what you call it. I just want you to make it!

(Naturally, if you visit my home and ask for burek with cheese I will end our friendship. Outside my home though, call every pie burek if you want.)

What burek means to the Balkans

Even if it is derived from the Ottomans, our beloved burek  has long ago taken on the simplicity and straight forwardness that is the Balkan cuisine. Burek has become as Balkan as the Balkans itself.

Even Turks that visit the Balkans agree pies here have far surpassed all other filo pies.

People from the former Yugoslavia know they've arrived home when upon opening the door they're hit with the aroma of pie just taken out of the oven. The moment of recognition, starting from the first time this occurs, contains in itself an entire childhood. One immediately retreats into the safety of memories, bringing back Saturdays. Bringing back memories of mom making homemade filo pies.

The kitchen takes on a large symbolism in the familiarity of those lulled memories. There, shiny balls of dough sit on the kitchen towels waiting to be spread out. 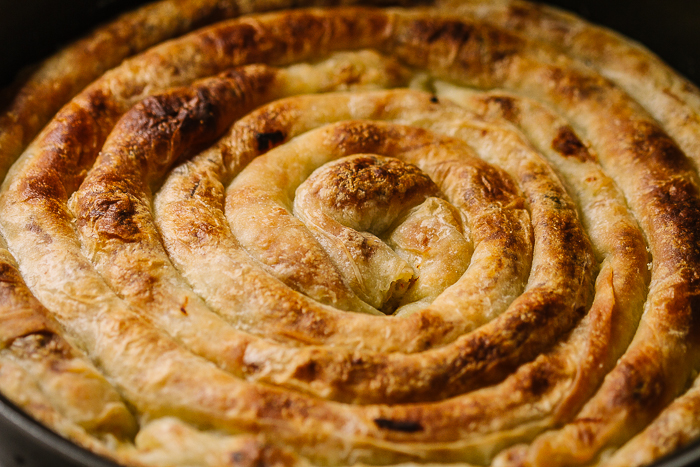 When we moved to the US - a place where no one understood why we came, a place where also no one knew where Bosnia was; it sounded like a weird Boston in Africa), the food mom made was a type of a green card for us. Proof we indeed were good people, did things the right way, and had a history somewhere in the old world.

If it tasted good, this history was welcome to stay. By proxy, we were too.

I was a teenager then, with so many things to be embarrassed of. First the regular teenage stuff. Then the additional layers of embarrassment, amplified. Being a refugee. The accent. The world of difference in tongue placement to pronounce "d" and to pronounce "th."

And also the accent on all things making me unalike regular kids. I never felt more revealed than during that time.

Yet, I was relieved to learn American born Americans (while raised with too much optimism to have the capacity to understand our despondent refugee stories), had an affinity for foreign food. During those years, hoards of people passed through our home. All were served a little bit of this and a little bit of that.

Some liked the soup. Some salad.

But it was burek and pies they came back for. Spinach pie. Potato pie. Mixed meat pie.

There was only one occasion not even pie was able to fix.

Middle school. Lunch. I sat by a girl so hungry she spat in her fries immediately upon getting them so other kids wouldn't steal them off her tray.

It was mid 1990s. Twenty minutes away from Washington DC. And there existed kids who spat on their fries so they could eat all of them.

There were hungry people everywhere, I learned. For some school lunch was the only thing they'd eat that day.

Once, I took out a round of pie like the ones we're making. As I was getting ready to eat it, the spitting girl asked me what it was. "Flaky pastry with a stuffing," I explained.

She looked at me with a look of disgust reserved only for lowest of the low. Embarrassment engulfed me. I didn't bring pita to school again for years. And I despised the spitting girl with bottomless passion.

The thought of her pricks me even now.

If I saw her again, I'd feed her some of my pie. Force feed her if necessary.

And she would love it. Just like you will. 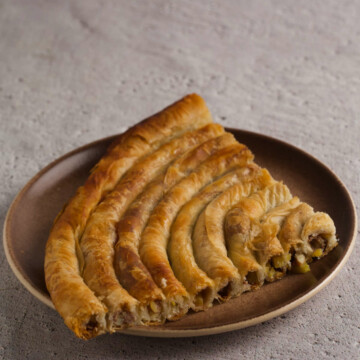 Resting the dough the first time

Rolling out and resting the dough the third time

Method 1 - stretching the dough with hands

Method 2 - stretching the dough with the oklagija rolling pin

Repeat the previous steps for the remaining 2 dough balls

If you want an easier, quicker recipe for burek, take a look at our burek with store-bought phyllo recipe. This recipe is for those individuals who want to learn the old-school way of preparing burek.  If this is your first time making burek, or you're a beginner, you’ll benefit from reading the accompanying article. Don't be discouraged if your first burek doesn't come out well. This is not a beginner's technique. If you plan to make burek more than once, take notes. Every oven is different, every rolling pin is different, and every palate is different. Once you have the basics down, everything else becomes a testing ground for your individuality. Burek is as yours as you make it! The video demonstrates making burek with the method of going in a circle and making small rounds of burek. Ingredient volumes were different as well. (More in the article.) With this volume you'll get about two round pans worth of burek (15-inch and 10-inch in diameter). You can play around with shapes of burek and sizes of your pans. If you make small rounds you'll get about 10-15 with this amount of ingredients.   This is a rough estimate! It will depend on how much you eat. We calculated it based on 4 very generous servings.   Butter: can be used instead of, or mixed with, oil. The taste will be heavier, but some prefer it.  Other fillings: although only meat pie is considered burek in Bosnia, in other Balkan regions all pies are called burek. The preparation process is exactly the same, but the fillings can be made with other ingredients (cheese, spinach and cheese, pumpkin, etc.). You can use this burek phyllo dough recipe with any of these fillings. Meat: Bosnian burek is made with either ground beef (preferably ground twice), or a lean cut of beef (think shoulder steak, rump roast, tri-tip roast, sirloin, even veal, etc). If you can choose, go for the second option, and finely dice (really important!). Substitute with ground pork (not diced pork!), if you eat it.  Seasonings: salt and pepper to taste are the best options. Substitute with one crushed bouillon cube or 1 tablespoon of Vegeta.  When it comes to stretching the dough, once you get some experience you'll naturally decide if it's easier for you to do one or the other. The point is to stretch the dough with minimal breakage. How you do this is up to you. More tips in the article! Pinch smaller holes and tears together, or add a little bit of flour over them. (Eventually, the dough will have to be cut, or will rip on its own anyway.)  If large tears happen salvage what you can, and throw away the rest of the phyllo dough. Then read the article for tips for the next time.  Serving: it goes great with salad and/or soup, and plain yogurt.  Storing: if planning to eat burek within 24 hours, it can stay in the (turned off!) oven overnight, but just that first night. Cover it with saran wrap or a kitchen cloth. Reheating: for the best, crunchy, fresh taste, reheat in the regular oven for a few minutes at 300°F/ 150°C. If you prefer the softer, chewier texture, heat it in the microwave. Freezing and unfreezing directions are in the article.