Bosnian (Balkan) baklava is the midcentury modern of baklavas; its value is its simplicity. Baklava at its core is a strong sweet meal. Done well, one to two pieces will satiate you in one sitting, kind of like the area coffee.

For a dessert with such cult following it’s surprising how many people shy away from making it. It seems incredibly  complicated. The layers. The filling... But after you break it down it all comes to walnuts, the dough, and agda.

First we tackle the pronunciation. “Ba-kla-vaaaaah” is wrong. “Ba-klava” is right. Think two syllables, without the long “aaaaah” at the end. Short and sweet. Just like baklava.

Now the walnuts. If you’re so lucky to have a walnut tree, wonderful. Grab a pound and start chopping. If not, store bought walnuts will do beautifully. See if you can find pre-chopped ones to cut down on preparation time. (And remember to take out your coffee grinder.)

While at the store, pick up some phyllo dough that comes in long sheets. I use the Safeway Select phyllo dough sheets, (13x17 inches long, 18 per package). No affiliation - they’re just what my store carries. Feel free to use whichever ones you can find. Phyllo sheets are located in the freezer section. Most people at the store won’t know what you’re looking for, so just search the freezer isles until you find it.

Look for phyllo dough sheets that will fit (or be a little bigger than) the pan in which you’ll be preparing (and then baking) baklava. (I've used a round pan here, but you are more than welcome to use a rectangular one.) You may have to cut some dough off as you're layering it to ensure it fits perfectly into your pan. You’ll need two boxes of phyllo, or about 36 sheets. I highly recommend you get into a habit of buying an extra box. Sheets rip and/ or get stuck together sometimes. Since your entire operation depends on phyllo separating nicely it’s good to have more on hand, just in case. You can always reseal and stick back in the freezer what you don't use up.

Now we come to the third important component of baklava, called agda (“agh-dah” or šerbe, “sher-beh”). Agda is simple syrup made by combining sugar and water over heat. You’ll find that many Balkan desserts are syrup based, so baklava is a great starting point to learn the magic of agda. It’s not complicated at all. Just remember to use the same amount of sugar and water. For a sweeter agda you can use a little less water. However when you're just starting out making baklava, it's best to use 1:1 ratio until you gain more experience. After the mixture comes to a boil, you’ll let it boil for 5 minutes over medium heat.

Another thing about agda to keep in mind is its temperature. Some desserts will require both the agda and dough to be hot during the combining process, while others will require that one is hot and the other cold. Baklava falls into the hot-cold category. Agda will be cold and baklava hot during the combining step. Granted, you won't mess up anything if agda is still a little bit warm. Some very experienced cooks have taught me this.

It's hard to determine how many servings this recipe yields because you don't know how many baklavas people will eat. It also depends on how you cut the baklava, and the size/ shape of the pan. My pan yields about 80-85 baklavas. If everyone eats 2, then I have about 40 servings. Yours will vary.

Things to keep in mind... Always, ALWAYS, always cut baklava before baking. Also, use best judgement when combining agda and baklava. You want to pour agda over baklava, but not to overdo it. Baklava should be extremely well moist, yet not "swimming" in the syrup. It's a balance you'll get a feel for with practice, but try to pay attention to it from your first baklava on. In short, if you've poured most of the agda over baklava, and it looks completely, thoroughly wet, you can stop right there. If you feel you should keep going, then keep going. Whatever you do, you can't make a huge mistake. Baklava will still be yummy, just make notes for the next time regarding your syrup preference.

With this recipe's phyllo dough measurements you'll have 1 (bottom) layer of 6 phyllo sheets, 9 layers of 2 sheets each on top of the bottom layer in between each is a nut mixture, and the top layer consisting of 3 sheets. This means you'll need to divide your nut mixture into ten parts. Instead of measuring 2.1 ounce each time, just grab a generous handful.

I think you’re ready. Yes? Let’s do it. (And for a recipe similar to baklava, check out roses, or how I like to call this dessert, baklava's pretty cousin.)

BAKLAVA RECIPES AROUND THE WEB

As elaborated, Balkan baklava is made with simple syrup. And good simple syrup requires practice. Baklava consists of a delicate phyllo-syrup balance. One overpowers the other and you've got a problem on your hands. You'll recognize a good baklava because you'll see each layer with nuts in between, while top layers will stay crisp and separate.

Perhaps you got the syrup technique down. Or you can even switch between honey and syrup baklava recipes with your eyes closed. Maybe your challenge comes down to volume. There is only a couple of you, and a huge batch of baklava.

Fret no more! I found another recipe for you. This one is by Hilah (how beautiful is her name?) over at hilahcooking. Her baklava is a successful combination of simple syrup and honey over phyllo. Hilah bakes a smaller batch of baklava - perfect if you're taunted by the idea of baklava leftovers.

A couple of things even I learned? Add an orange rind (instead of lemon) into syrup. And to remind you to make sure your nuts aren't salted, whichever ones you're using. (I'm rooting for walnuts, of course!)

Let me hammer this in more. Baklava is a rich dessert. A heavy, hearty dessert. When you want baklava nothing else will do.

But what about those other times? (Times when you just want a bite or two of baklava without having to make it from scratch, or feeling like you ate the heartiest dessert in the world.)

Mandy over at mandyrecipeboxblog has made something I've never heard of before. Something genius. Something that made me say over again "why didn't I think of this?! 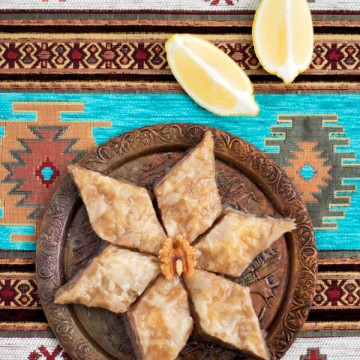 Aida
Bosnian (Balkan) baklava is the midcentury modern of baklavas; its value is its simplicity. Baklava at its core is a strong sweet meal. Done well, one to two pieces will satiate you in one sitting, kind of like the area coffee.
5 from 2 votes
Print Recipe Pin Recipe
Prep Time 30 mins
Cook Time 1 hr 45 mins
Total Time 2 hrs 15 mins
Course Dessert

What you don't eat cover with foil and transfer to fridge. If preferred, warm baklava up in microwave for 10-15 seconds before consumption.
Baklava can stay in the fridge for several days, although it rarely does. 🙂
For easier cutting, you can place baklava in the fridge for 30 minutes after you layer it (in this case you can butter that last layer right away).
A friend bakes hers at 400°F for a few minutes until it catches color, brings down the temperature to about 360°F and bakes it another 40 minutes. I haven't tried it this way, but if you report back.
Tried this recipe?Let us know how it was!
« Eggplant Potato and Ground Beef Moussaka Recipe
Bosnian Pot Stew (Bosanski Lonac) Recipe »