Eggplant, potato and ground beef moussaka, an attention worthy casserole. Layered, topped with cheese, and then baked, this is a family dinner that will appease everyone at home.

It all started in Sarajevo, on the second day of last Bajram. I was involved in a progressive dinner of sorts, except every stop included every single course. By end of day, I was past food coma and well into moonwalking. Willpower checked out on my ever-expanding dress.

At some point my mouth went numb from eating. Have you ever had your mouth go numb, not counting the dentist visits?

It was around this time I arrived to Teta* Izeta’s house.

Teta Izeta is the definition of a lady. Always poised. Always composed. Always relaxed. Always dressed to the nines. Impeccable hair, nails and makeup whether it’s noon on Wednesday, or a Saturday morning. Add to that incredibly kind, even in instances when life was far from kind.

Another interesting tidbit about Teta Izeta: for as long as I’ve known her (my entire life) I’ve never heard or seen her disagree with anyone. Yet before you know it, everyone’s eating out of her hand. She’s got that kind of power.

And so that evening, on second day of last Bajram, when I said I’d only have one baklava and a cup of coffee Ms. Izeta nodded softly probably thinking to herself, "Just you wait little girl. Just you wait."

One baklava and a cup of coffee later, our company divided into two groups. One group went to the kitchen and I stayed with other in the living room. About 17 minutes later someone tapped me on the shoulder. “She’s looking for you,” they said. I headed over to the kitchen.

Waiting for me was an eggplant dish I never had before, and Teta Izeta, smiling in the background.

At this point I was beyond food. I had one of those sensations when you're so incredibly full you can't imagine ever, ever, ever eating again. But there I was, midst of one of those scenes when the entire crowd pauses to see what will happen next.

My mouth was in excruciating pain, and I couldn't see straight. My food high was in full effect. But I knew it had to be done. So I gathered the very last drop of energy I had and bit in...

And that first bite was the exact moment I fell hard for eggplant. Add to that the event that inspired me to begin incorporating (previously thought of as) underwhelming vegetables into daily meals. (Before you remind me eggplant is a nightshade fruit, Betty here found a way to appease everyone on the subject.)

One of these meals is eggplant moussaka (musaka od patlidžana) that I’ll share with you today. This recipe is conglomeration of my mom’s and sister’s moussakas, and it took a while to get just right. I think you’ll enjoy it very much. (Teta Izeta's veal and eggplant recipe is here.)

Previous moussaka recipe on the site is a good basic one to start with. But if you’re going with something chewier, and with a Mediterranean twist you won’t make a mistake by going with the one today, which adds more soft middle layers in form of eggplant and cheese.

Eggplant has a certain level of bitterness and high water content. To get rid of it put generous amounts of salt on the cut pieces until it releases its juices (20-30 min or longer). After, press it with paper towel to draw the moisture out and throw into a pan for a quick browning. You can keep the skin on or not, but skin itself has some bitterness, so if you keep it on make sure you wait for it to juice longer.

US eggplant is on the large side, so look for a medium sized one, or two smaller ones. Always use potatoes for moussaka’s bottom layer, and make sure to cut them into thin (¼ inch or so) rounds. Also, think about the layers you want to make, and make sure to divide the ingredients ahead of time. I've made it simple for this recipe, so each layer will be half of an ingredient, except for cheese which has one layer.

I used to bake moussaka for a while and then pour the sour cream/ egg mixture over it. I was wrong. Now I pour it before baking and recommend you do the same.

*Teta stands for Ms. or madam in Bosnian. In other Balkan parts, Croatia for example, it can also mean aunt or auntie. 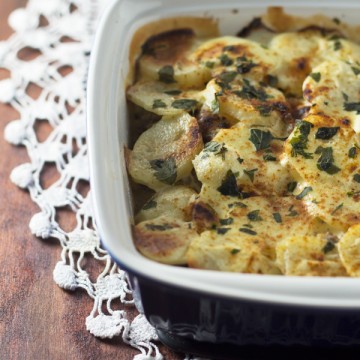 Tried this recipe?Let us know how it was!
« Crescent Rolls (Crescents)
Balkan (Bosnian) Baklava Recipe »