Old fashioned goulash with beef and mushrooms the way it’s done in the Balkans and Eastern Europe. This is an easy recipe for a classic stew with diced beef and lots of paprika. Oh, and you know what else? It’s d-e-l-i-c-i-o-u-s!

This dish was brought to the Balkans by the Austro-Hungarians. Because of this, Balkan and Hungarian versions of the recipe are alike. Think of it as the old-fashioned goulash.

However, you’re probably wondering what the is difference between American and Hungarian goulash.

There are several differences. You could even say they’re completely different dishes.

American goulash is made by mixing a ground beef sauce with elbow macaroni. It’s also known as American chop suey and Johnny Marzetti. (The latter is more of a casserole.)

Hungarian and Balkan goulash leans towards a stew. It’s made with larger chunks of beef simmered for a long time with different veggies. Infused with fragrant paprika, this goulash is served both with sides and/or as a standalone dish.

There is a traditional Bosnian Beef Sauce I make that’s very similar. Equally yummy, it’s the reason why until recently I almost never made goulash at home. What changed the game for me was the addition of mushrooms!

This is now one of my favorite go-to recipes. I hope it becomes yours too!

Butter: For a truly old-fashioned feel sub with lard.

Meat: Best cuts to use are tougher ones like beef neck bones, chuck roll, shoulder, and beef round. However, you can get away with “younger” meats like veal.

Mushrooms: Sub with fresh shiitake mushrooms for an even meatier taste.

Paprika: Balkan goulash is usually made with sweet or mild paprika. However, adding spicy paprika really intensifies the flavor.

Seasonings: Additional seasonings that go great in this sauce include marjoram, cumin, and thyme.

Vegetables: While just a few veggies were used (garlic, onion, and mushrooms), you’re welcome to include potatoes, carrots, and tomatoes. This isn’t a stew that you should overload with veggies. (Here are a few that you can.) Goulash is a dish that primarily crowns the meat.

There is an expectation that classic goulash has flavorful chunks of meat that fall apart when you pick it up with utensils.

This is achieved by a long simmer of tougher beef cuts with little to no fat.

However, I’ve done it with softer cuts too, even veal.  As long as you watch the meat, and adjust your timing and method slightly your dish will come out amazing!

(Our lightning-fast instructions are here to give you an idea of how to make this goulash with beef and mushrooms. For more detailed information look at the recipe card below!)

*If using veal, skip step 1 and simmer everything on oil. However, season the meat with paprika first.

Boiling the meat: Boiling meat in stock allows for the meat to soften. It also cuts down on total simmering time in a big way. For extra hard meat boil a little bit longer.

“Younger” meat: If using tender meat cuts, or veal, skip boiling. Instead, start by seasoning meat chunks with paprika first. Then in the pan heat up 2-3 tablespoons of oil and simmer meat, garlic, onion, and remaining seasonings on low for 10-15 minutes. Other steps are the same.

What To Serve Goulash With

Keep leftovers in the fridge for 2-3 days. If planning to freeze the stew add another cup of broth during cooking.

If you make today's Old Fashioned Goulash and like it, please consider leaving a ⭐️⭐️⭐️⭐️⭐️ (5-star) rating. This will help others find the recipe more easily! 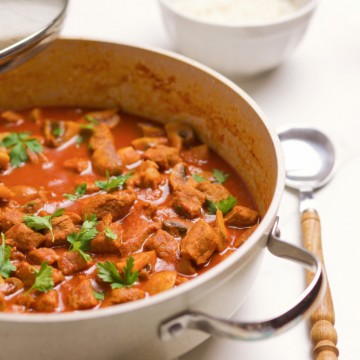 If using tender meat cuts, or veal, skip boiling. Instead, start by seasoning meat chunks with paprika first. Then in the pan heat up 2-3 tablespoons of oil and simmer meat, garlic, onion and remaining seasonings on low for 10-15 minutes. Other steps are the same.