Are you looking for a simple and easy Croatian or Slovenian poppy seed roll recipe? You’ve come to the right place! Not only is this poppy seed roulade made the same way across the region – yes, homemade poppy seed strudel recipe is prepared the same way in Bosnia and Serbia too – but some consider it tastier than chocolate! In the region it goes by the name of makovnjača, potica and more… 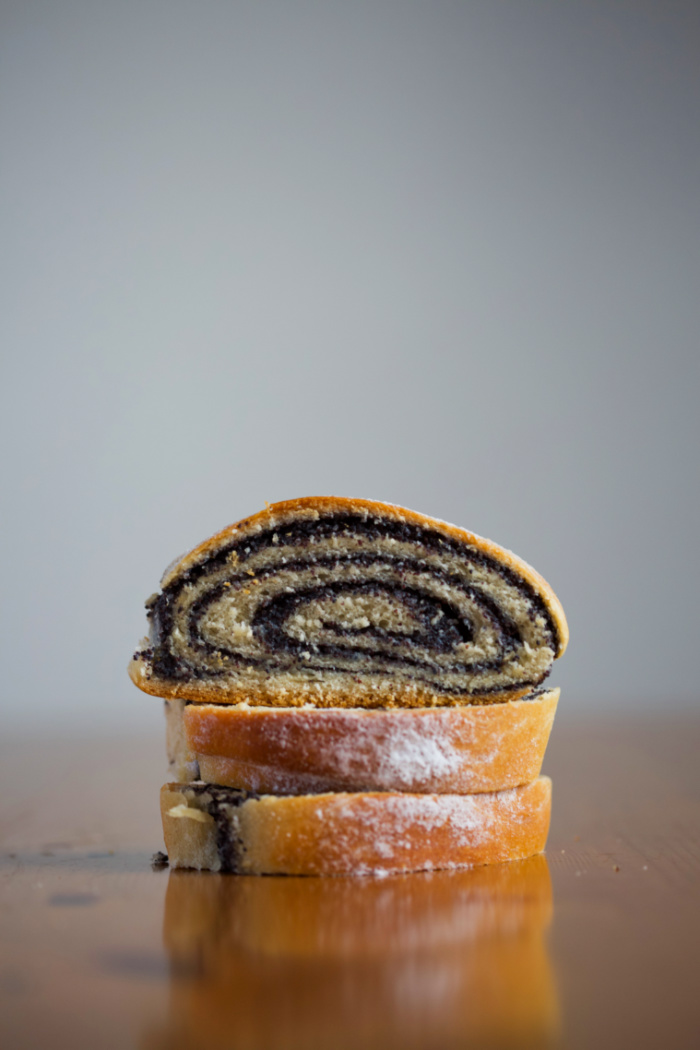 Poppy seed roll is probably the best known of all the strudels. Deservingly so.

(Strudel – you guessed it – is just a fancy word for a roll. So is roulade.)

So what is this amazing poppy seed pastry?

This poppy seed dessert is simply a roll filled with graphite gray, microscopic poppy seeds ground to flour consistency and then mixed with sugar, farina and milk (this filling tastes tart, gritty and sweet at the same time), encased in the softest dough.

The roll will imprint on your memory faster than cinabon did the first time you smelled it at an airport.

I forgot about this strudel for a while.  It was challengin getting ingredients in DC grocery stores as poppy seeds aren’t used much in American cuisine.

Meanwhile, Sarajevo bakeries bombarded (and spoiled) me with poppy seed infused and inspired desserts. So it never occurred to me to make the poppy seed strudel at home.

(Besides, my fridge – and I bet yours is the same – currently has at least a few preserves. Each time I think about making a pastry with a filling I feel a pinch of guilt for letting the jams just sit there, waiting to be consumed.)

But make it we did (Aleksandra did most of the experimenting for this one, with a huge tip from our cousin Anela), and you’re going to love the result! 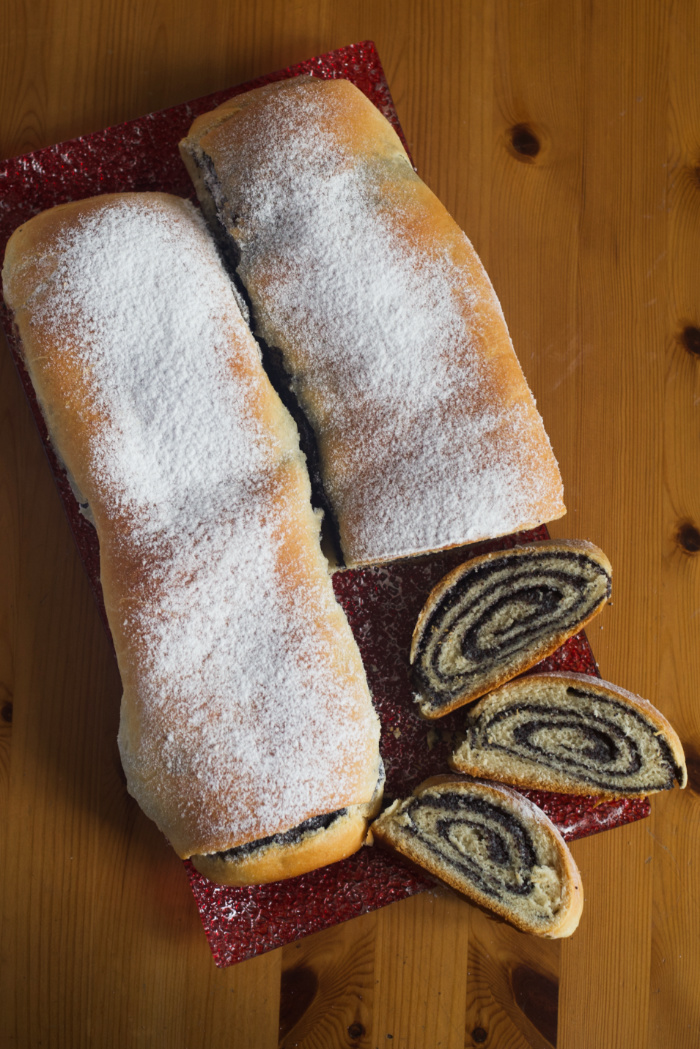 IS POPPY SEED ROLL (MAKOVNJAČA) THE SAME AS SLOVENIAN POTICA? 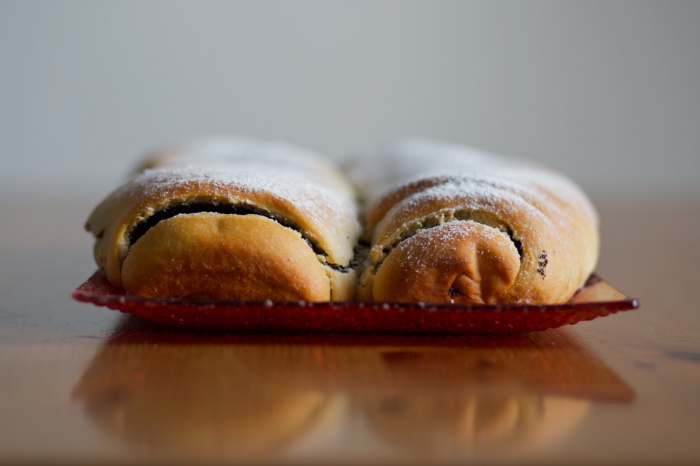 It’s believed that strudel made its way into the Balkans during the Austria-Hungary period.

In fact many, many Balkan desserts and pastries (think amazing Slovenian tortes and cakes), are Austrian (and Hungarian) in origin. Yet, according to some Austrian sources, the roll may actually be a Turkish sweet.

It may have even been considered to be baklava’s younger sister.

When is the poppy seed roll made?

There isn’t a particular holiday associated with this roll.

Poppy seed roll is an all-year round pastry. You can make them for the holidays, for the weekend, for today or for tomorrow. If I’m to pick a season, it really hits the spot during cold winter months.

It’s just the right pastry to accompany your coffee during snowy mornings when you’d rather snuggle up inside than hit Starbucks.

In the Balkans poppy seed roll is almost always made together with the walnut roll.

As poppy seed roll dough is exactly the same as the walnut roll dough (the only difference is in the filling), it’s easy to double it up and have two different kinds in one bake.

A COUPLE OF POPPY SEED WARNINGS 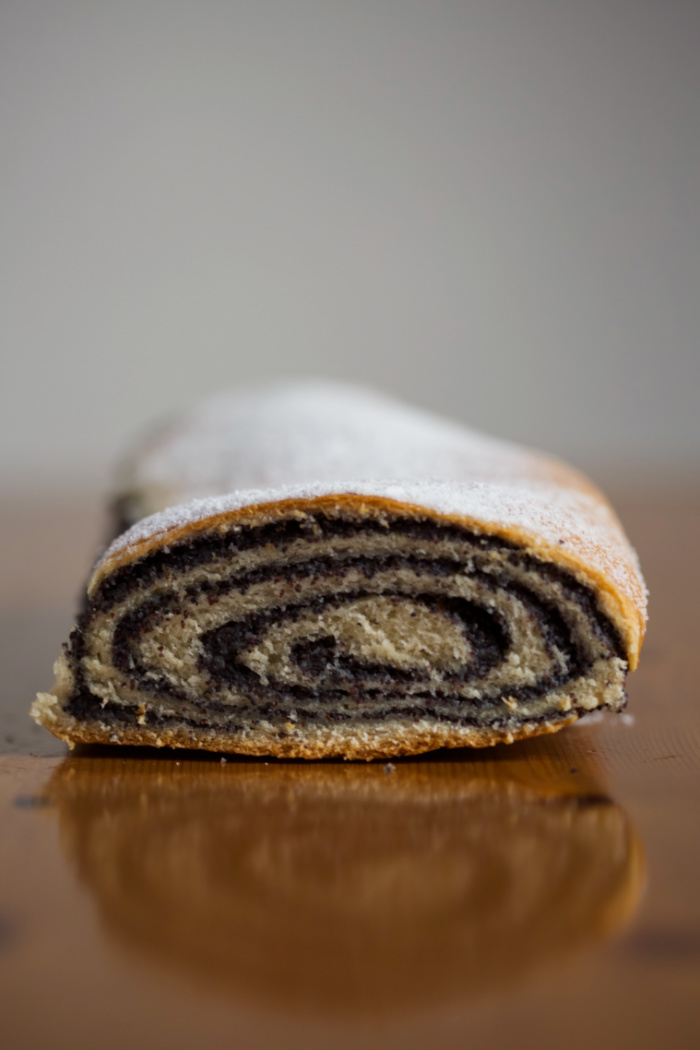 Here are some examples of dough that we usually make on BLB, and also our recommended dough for the poppy seed roll.

So what type of dough is best to use to make a poppy seed roll?  The answer will surprise you… it’s the simplest water based dough.

The idea for the dough actually came from our cousin Anela.

Anela loves to experiment until she gets a recipe just right. Especially sweets. Her strudel is the best in our family, and it’s hard to only eat one piece. We were surprised to find out she used water instead of milk for rolls.

However once we tried making water based dough for strudel we were hooked.

Too much of a good thing does not equal better in the case of the poppy seed strudel filling.

Poppy seed roll is best when there is a nice ratio between the dough and the filling.

The charm of a poppy seed is the strength of its taste, and that strength is best when it’s in small doses. Otherwise you might as well make yourself a bowl of poppy seeds and eat them like cereal.

They’re like burek with too little meat. As our mom is fond of saying, these are the kind of pies where you “run, run and maybe you’ll get a little bit of filling.”

(Everyone has a cousin that skimps on the filling. Don’t be that cousin.)

I love the taste of poppy. It’s smooth, rich, moist.  Combined with a good pastry, it’s better than chocolate.

I love when a little of it drips on my chin and I wipe it with the back of my hand (and then lick the hand :)). At the same time, I don’t want the dough part to be excluded.

So repeat after me:

WHAT KIND OF POPPY SEEDS TO LOOK FOR

If the type you have in your grocery store isn’t in flour form use a coffee bean grinder to get it down to flour consistency in small batches. A food processor isn’t your friend here; you need something designed for tiny seeds.

In fact, it’s best to buy non-ground seeds and then ground them at home. The flavor is at its best intensity this way.

What happens if you don’t grind the poppies down? They’ll be too gritty and the poppy seed roll bitter no matter how much sugar you add. Grounding the seeds allows them to express the intensity of their taste while allowing them to mix well with other ingredients.

You’re welcome to mix the ground and non-ground seeds at a 4:1 ratio.

When your poppy seeds are of flour consistency you’ll slowly add them to boiling milk together with vanilla extract and sugar. Once these ingredients combine you’ll also add farina, a little at a time.

The farina is a new thing for me as far as poppy seed rolls are concerned. However, farina together with milk really brings out the poppy seed grit in the nicest way.

I was skeptic at first but Aleksandra made it several times. Her rolls got better and better. My husband can’t stop eating it and as he’s not into sweets that are not simple syrup based (like baklava, etc) I knew we hit gold. 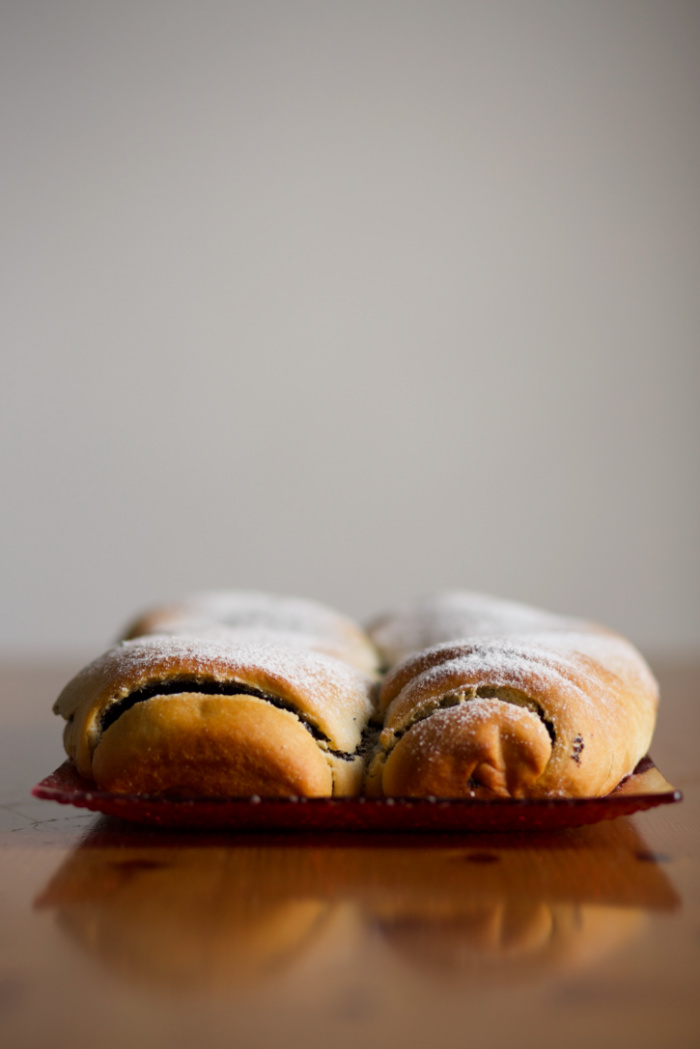 WHAT TO EAT THE POPPY SEED ROLL WITH

Although a dessert, poppy seed roll can easily become your entire dinner. It’s hard to stop eating it. You’re best off doubling the recipe right from the start.

It’s best served with a warm cup of mint tea, coffee, or a glass of milk.

It’s a roll that never survives until the morning.

If by some crazy chance you don’t eat the entire strudel right away, fold it in saran wrap and put in a plastic bag. You can leave it cupboard or bread box overnight.  When you get ready to eat it again, it’ll be fresh this way.

Poppy seed roll usually lasts about 3-4 days. For the best taste consume it within a day or two.

Warm it up in an oven, instead of a microwave lest you end up with mushy roll.

HOW TO MAKE POPPY SEED STRUDEL STEP BY STEP

1. MAKE THE DOUGH by first activating baker’s yeast, and adding it to flour together with oil and baking powder. Knead until you get a soft ball of dough and let rise for at least an hour. Best if it rises between 1.5 and 2 hours.

3. COMBINE DOUGH AND FILLING by dividing dough into two parts.  Roll out the first part, fill it up with one half of the filling and roll the long side up. Repeat with the remaining ingredients. Place rolls in a pan, brush with water and butter, then bake.

4. COOL DOWN after baking and dust with confectioner’s sugar.

Would you like to see recipes for rolls and pastries?

Simple and easy poppy seed roll recipe from the Balkans. This poppy seed roulade is made the same way in several countries. It’s called potica in Slovenia, makovnjača in Serbia, Croatia and Bosnia. Regardless of the name, it is still the same, delicious poppy seed strudel that will have you reconsider chocolate!

* Longer rising time is even better. Sweet spot is between 1.5 and 2 hours.

**This step can be done immediately after baking also.

Poppy seeds should be very finely ground (think flour). If you are mixing it with non-ground seeds use a 4:1 ratio (ground to non-ground).

Remember to add dough rising time to total cooking time, although some of the time waiting can be spent making the filling.

Serving size is approximated based on the serving 2 roll slices per person.

The roll can be consumed up to 3 days after baking. Keep wrapped in saran wrap.