Today's recipe is for the Chicken Semolina Noodle Soup.

Before you exclaim  "another soup, Aida?!" let me add it's been raining for the past five days, and there is nothing more comforting than a bowl of my sister's Chicken Grits Noodle Soup (pileća supica sa griz noklicama). We've already established that chicken soup is penicillin in some cultures, but my sister's soup is a cure yet to be discovered. If you were here right now, you'd eat the whole pot.

P.S. Crazy about soups, like me? Try the beef noodle soup, it'll blow your mind! Also the traditional Bey's soup is infamous in these parts and it's made with chicken, okra, and a few more soup-y goodies. Every now and then I want the simplest soup I can find, and I go for the potato soup. 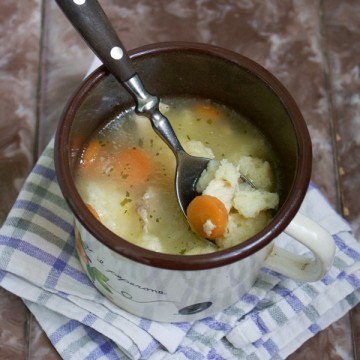 Chicken thighs or chicken legs with skin work great. If you can't find some of the vegetables, use what you have. While making noodles drop them into broth. If you try to get the noodle mix off by dipping spoon into the broth with the noodle batter on it noodles will fall apart. As noodles expand five or six times and absorb lot of broth make sure to form smaller noodles. Half a teaspoon of batter per noodle creates perfect sized noodles. If your noodles fall apart add a little more grits. If they're hard, leave them in hot soup longer before serving the soup. If they're too hard use less grits the next time. Why add chicken bouillon to stock you ask? Homemade chicken stock/broth, while fantastic, is not salty enough. Bouillon adds that extra flavor. You can use salt or Vegeta instead, or none at all.