YES.YES.YES! Easy to make, delicious and hearty Balkan bean soup (stew). Beans combined with meat and veggies, then thickened with a paprika based roux. Uh!

In case you didn't get that, let me repeat it one more time: we're talking about soaking beans which are added to simmered vegetables and meat, cooked over low fire, then thickened with a paprika based roux. The result is a delicious thick soup (stew) overflowing with meaty, hearty beans, processed to perfection.

If you've noticed a similarity in today's bean soup with previous bean stews we made, that's because they're different versions of the same dish. Why did I call it soup instead of stew today? For SEO.

A challenge in writing about a cuisine that's relatively unknown in the West often has to do with translating. How do I translate the taste? How do I depict it in a way that lets you know this is something worth your time in the kitchen? How do I go against what's already written, and explain that it's so much more.

Depicted as a soup elsewhere online. But it's a lot more than a soup. A soup is not a complete meal. It's merely its beginning. Today's bean soup is its beginning, middle and end. Save for a slice of bread, and maybe a tomato sliced and salted, you need nothing else with it.

The meat gives it a heavier accent, although beans do not lack in protein. This is a hearty meal. Like most stews, it's better when you warm it up the next day. As beans are a powerful force, I advise against eating it as the last meal of your day. This is especially true for those of you with a sensitive stomach.

With that in mind, I leave you to it.

Bean stews, known as grah or pasulj are beloved in the Balkans. One of my favorites of course includes the kielbasa bean stew. Done in a pressure cooker, this one will be on your dinner table in no time (video included).

There is the vegetarian version of the bean stew which I tried, loved, and approved. It's a top secret recipe from the old Yugoslav National Army chefs. In Balkan colloquial, it's said they hid this recipe like a snake hides its legs.

Finally, I can't finish any discussion of Balkan beans without the baked beans. This one is more a side dish however you could easily make it into a full blown dinner. 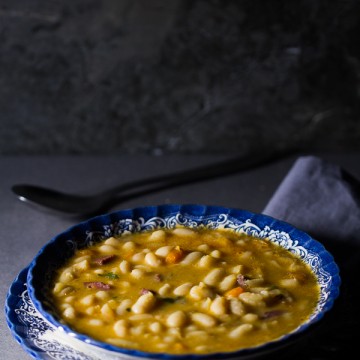 Tried this recipe?Let us know how it was!
« Slanci: Balkan Breadsticks
No Bake Chocolate Pudding Biscuit Cake »