Cheese pie (also known as cheese burek and pita sirnica), belongs to the family of Balkan pies made with flaky phyllo dough and a rich stuffing. The real challenge is eating just one piece! Shall we?

Flaky, savory phyllo dough pies were introduced to the Balkans by the Ottomans a few centuries ago. Since then they've taken on local flavors and become a thing of their own.

Today's cheese pie recipe is a phyllo dough pie stuffed with a scrumptious egg, cheese, and sour cream filling. You can eat this type of savory pastry all over the Balkans, but predominately in Bosnia, Croatia, and Serbia.

In Bosnia, it goes by the name pita sirnica (or just sirnica), translated as a pie made with cheese. In other Balkan countries you'll usually find it as cheese burek. (Croatian štrukli, and Serbian gibanica are its close relatives!)

Pies taste best when they’re made with homemade phyllo. However, with a few simple tricks you can make a delicious pie with a box of phyllo from the store. (Don't worry, we teach you how!)

Our fast and simple instructions are here to give you an idea of how to make cheese burek. For more detailed information look at the recipe card below!

Serving: This pie is best served about 20-30 minutes after baking. (An hour is even better if you can be patient. From experience, this is hard.)
Assembly: Assemble cheese burek just before baking.
Storing: Store in a cool place (outside) for up to a day. Transfer to the fridge for up to 2-3 days. (Cover in plastic wrap.) Use your favorite reheating method, or eat cold. Do not freeze.

What is phyllo pie?

Phyllo pies consist of tissue paper-thin dough called phyllo (filo, or fillo too), stuffed with different savory or sweet fillings. These pies are some of the foundational elements in Balkan and Middle Eastern cuisines.

What country is burek from?

Burek, or borek, originated in Central Asia and the Middle East and spread throughout Europe during the Ottoman Empire. (Burek, btw, is just a different way of saying "phyllo pie.")

Therefore, burek is a phyllo dough pie (look above!) that consists of flaky dough filled with different stuffings. (In Bosnia and Herzegovina burek is the meat pie only, all other pies are named based on their filling.)

Today you can find burek in the Balkans, Eastern, and Central Europe, as well as the countries with immigrant populations from these areas.

What's the difference between cheesecake and Balkan cheese pie?

Cheesecake is a dessert made with cheese and a crust. Balkan cheese pie (pita sirnica, or burek with cheese), is a savory dish made with filo dough and stuffing made of cheese.

A couple of tips on using phyllo dough.

If you make our phyllo cheese pie recipe (sirnica, cheese burek) and like it, please consider giving it a ⭐️⭐️⭐️⭐️⭐️ (5-star) rating. This helps others find this recipe more easily! 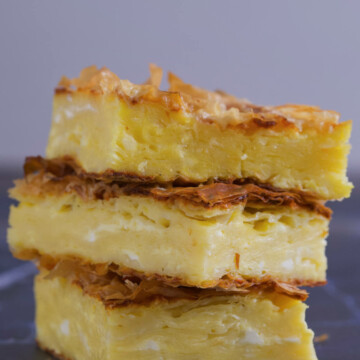 Cheese:  ricotta, feta, farmers, queso fresco, goat cheese, cottage, and even gorgonzola work great for this cheese pie recipe. Most soft cheeses are a win (not brie though!). Avoid: hard and semi-hard cheeses like gouda, cheddar, and Edam as they'll melt and burn instead of melt and bake. Oil: Sub with sunflower, canola or coconut oil, or cooking spray. Or use butter. Avoid: olive oil. Phyllo dough: Get phyllo dough in sheet form. Avoid: puff pastry and phyllo cups. These products are not the same! Assembly: Assemble cheese burek just before baking.