Zucchini pie is a savory pie with a refreshing kick, made with phyllo and zucchini cubes.

We've made a lot of pies together, haven't we?

There was the spinach pie, ground beef and potato pie, and homemade Balkan phyllo (jufka or tijesto). We've even done the crustless pie.

Today's pie won't surprise you as far as preparation goes. Appreciating its taste, however, can go either way. You'll love it. Or you'll hate it. There is no middle when zucchini pie is in question.

Good news is that most people love it.

If you'd like a description this is it: zucchini pie is a savory pie with a refreshing kick at the end. It's prepared just like the cheese pie, except you subtract some cheese and add zucchini cubes. (Alternatively, you can grate zucchini, but it tastes better if you dice it. It also takes longer. But most things that taste better, take longer to make.)

The trick is to peel zucchini (don't even think about keeping the skin on), and dice it into the smallest cubes you can. At this point garnish it with plenty of salt, and leave aside for at least 30-45 minutes. This process gets zucchini to sweat out a lot of its liquid.

Stews (such as Balkan ratatouille), are best with fresh, juicy, garden vegetables as they make that lovely sauce we dip our bread in. Pies though, are a different animal. They're better with drier vegetables. Some water content is welcome. But too much water doesn't make the pie soft, as one would think, but instead turns the pie watery.

Or maybe it just seems that way because at the end when you wash the salt off the zucchini cubes, and then squeeze each handful hard before transferring it into a dry bowl, it's as if you're squeezing a sponge from the bottom of the sea.

So another trick to get it to be drier is to look for for older zucchini at the end of the zucchini season. Late August that is, if you're getting yours at a farmer's market. If you get it at a supermarket, your guess is as good as mine.

If you make this pie, let me know what side you come out on.

Love it? Hate it? 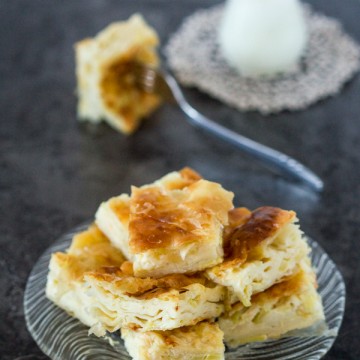 Preparation itself is about 45-min (about 15-min to dice zucchini, and about 30-min to later layer the phyllo with it). However there is a 45 minute wait for salted zucchini to sweat out the liquid. Baking pan used for the recipe was a round one with a 14-inch diameter. Consume the same day. Zucchini pie is not good overnight.
Tried this recipe?Let us know how it was!
« Shopska Salad
Smreka: Fermented Juniper Berry Juice »