If there was a vegetable popularity contest, zucchini and eggplant wouldn’t score high. (Not with potato around!)

As if they’re some vegetable ugly stepsisters, eggplant and zucchini are never the meal's headliner. So here they are, as side pieces. But oh, what side pieces!

That’s right! Breaded eggplant and zucchini. Then fried.  Not everything is healthy, nor does it need to be. (Still beats anything packaged.)

This avoidance of eggplant and zucchini on the menus is mostly due to texture (especially eggplant texture), which when placed against pepper crunchiness or tenderness of your everyday spinach, doesn’t rank well.

Both zucchini and eggplant usually require a good sweat (zucchini due to water, and eggplant due to bitterness) before use, adding an extra 15-45 minutes to preparation time. Who has time for that?

Today’s breaded zucchini and eggplant recipe circumvents elaborate sweating. Trust me, I’ve tried them every which way, but this breaded version tops them all.

Everyone will tell you to wait. But you're adventurous, I feel it!

You may like to leave the skin on both, but it's best if at the very least you peel the eggplant. Not only is eggplant skin bitter and you won't end up eating it, but it's usually full of chemicals too.

You'll notice in the video for this breaded eggplant and zucchini recipe that zucchini isn't peeled. This is because zucchini for the video came from Aleksandra's garden. It was 100% organic and pesticide free.

(Otherwise I'd peel both!)

For the recipe to work, you have to work fast. You probably prefer it that way anyway!

You need twenty - definitely no longer than thirty minutes - to end up with an impressive bowl-full of crunchy vegetables that are somehow soft at the same time.

On the crunchiness scale, these fall between the breaded baked zucchini and breaded crepes. Additionally, quick frying and avoidance of sweating help seal in the freshness.

The process results in taste of compounded flavors, where from the initial crunch the eggplant and zucchini are almost in their fresh state but with warm, softer overtones, and a coat of mouthwatering breading.

You could do all sorts of things with eggplant and zucchini once you bread them.

These are a perfect side you can dip in ketchup, tartar sauce, ajvar or hummus. (Tailgating anyone?)  Breaded eggplant is a great option to upgrade your eggplant parmesan. And while you're at it, have you tried our breaded and baked zucchini?

Finally, this recipe is a decent vegetarian dish option for those of you who are finding Balkan cuisine overly meat centric.

Vegans, I’m working on it. Meanwhile jump over to Nicole’s fantastic blog, where she shares a lot of vegetarian and vegan wisdom as she makes her way through the Balkans. 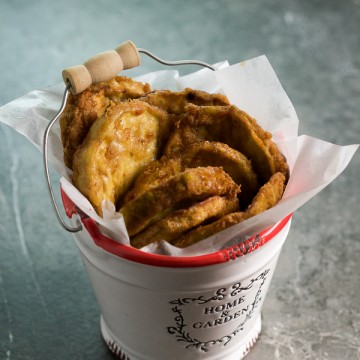 Aida
Breaded eggplant and zucchini: if you’ve ever had doubts about these two, now is the time to put them to rest. Tough but dewy eggplant and zucchini, dipped in flour and egg, then frizzled until they achieve a perfectly crunchy softness.
5 from 1 vote
Print Recipe Pin Recipe
Prep Time 5 mins
Cook Time 15 mins
Total Time 20 mins
Course Side Dish
Servings 6