The most tender and soft chicken pie infused with homemade chicken broth. First the chicken is brought to boil until it gives its all to the broth, and then shredded. Shredded pieces are used in between crunchy phyllo (or tortillas even), which are furthermore softened with the chicken broth. You'll love this one, I promise!

No article for today, just enjoy this wonderful recipe!

I can't imagine life without soup. The most basic soup of all, the most comforting, the one that heals best when we're sick or when we're sad, the one books are dedicated to, is of course the chicken soup. Instead of regular noodles, this one is made with delicious grits noodles. These melt-in-your-mouth, soft-yet-gritty noodles and slurp-worthy chicken broth belong together.

If you haven't seen or heard of BLB's chicken "bump" pie you really don't know what you've been missing. Easy to make dough/ batter, garnished with huge chicken pieces, baked and later smothered with sour or heavy cream. Can you say heaven? Although I was certain this amount of crazy only happened in the Balkans, I heard As of lately I heard this type of batter is called "Yorkshire pudding," except they make it with sausages. I won't blame you whichever way you choose to make it.

And of course there is the basic chicken and rice bake. Do you know how to make this plain chicken recipe? We're not getting sophisticated here at all, this is as basic as it gets. 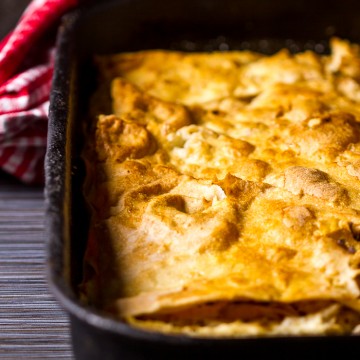 Tried this recipe?Let us know how it was!
« No Bake Walnut Pralines (Bajadera)
Watermelon Shaped Bites »