No bake walnut pralines are a three layer easy-to-do dessert. A homemade version of the regional Bajadera candy, these pralines are less creamy but more filling.

Bajadera is well known in the area. It's one of the favorite regional candies. It's nearly impossible to recreate the exact replica of this praline at home. (However this hasn't stopped most of moms from trying.)

Honestly, I kind of prefer the vast array of homemade versions.

The version on here today is close to the marzipan squares we did in 2016. And it's yet another in the never-ending array of walnut desserts  and walnut sweets on the site.

But instead of two layers, we now have three. The third layer is created by dividing ground walnuts and combining one of the halves with melted baking chocolate.

I don't have information about Bajadera's origins. It's currently made by the Kraš candy factory in Croatia. It's one of the great marketing successes of the region in a sense of a beautifully packaged recognizable little sweet. Gold wrapping paper is hugged by another (white-brown) striped layer. Once you see it, you'll recognize it anywhere in the world.

But whether Kraš invented these pralines I don't know.

The story could be similar to the story of Vegeta (local seasoning mix similar to seasoned salt), which allegedly was created by an old lady who put a bunch of herbs and spices together. Then, of course, a company came and took over the recipe and has been making ridiculous amounts of money from it since.

(Although this also could be a totally made up story to rile up the theorists.)

It doesn't matter, as now you can make delicious homemade Bajadera pralines at home. 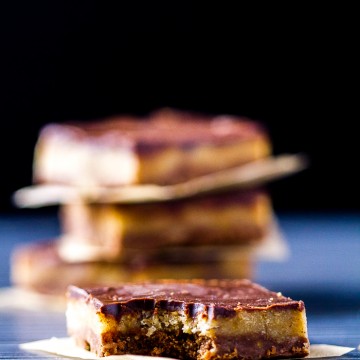 This recipe yields 40-ish squares. Serving size is about 2-3.
Tried this recipe?Let us know how it was!
« Chocolate Cake Rolls
Chicken Pie »