Ground beef phyllo pie. Ground beef (or veal) layered in phyllo sheets softened with butter, then baked until golden. Much pie. No fuss.

Ever since I learned to make pie rounds with store phyllo, that's usually what I do when I'm making a quick one. Sometimes I line them up like cigars. (Unless I'm making the cheese pie.) So it occurred to me that we've never done a meat phyllo pie layered horizontally.

Pita (pie), as you may know, is one of the first dishes you'll encounter in the Balkans. How is it made? Well, first the thin dough is made (or in our case taken out of the box), it's filled with different fillings (meat, cheese, vegetables), and baked.

Every culture has a similar recipe for some type of flour+filling concoction.

Pita is sold everywhere in the bakeries but don't buy it there. Regional bakeries are great for breads and crescents, but most produce subpar pies. Instead, go to one of the many places called 'Buregdžinica', as they specifically make just pie in all shapes and forms.

What I love about pies is their malleability. They are the kind of food handy to take to work for lunch, and quick to make and put on the table at home for dinner. It's compact. It doesn't leave crumbs (trust me you'll eat even the crumbs). And it tastes significantly better than most things you'll whip up in less than an hour. (I'm underselling here.)

I like to dip my pita yogurt (fluid, European kind) or kefir, and make a simple salad to go with. Like most meals, I pregame pitas with soup.

Here we continue with a refresher of recently translated recipes. As mentioned, all recipes have been translated into Bosnian. While it may not benefit you directly, here's a quick review of some of those dishes with a description. Maybe you'll want to make some of them soon. 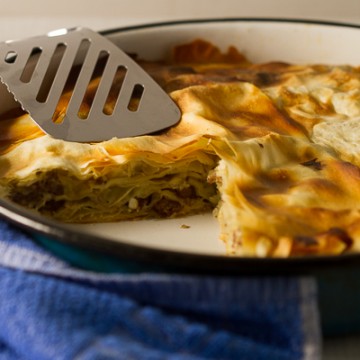 Tried this recipe?Let us know how it was!
« Cream of Spaghetti Squash and Potato Soup
Sarma: Best Traditional Balkan Stuffed Sour Cabbage Rolls »