Cream of spaghetti squash and potato soup. Only a few simple steps until you have a great new take on a beloved fall classic.

Most people make the pumpkin soup this time of the year. So we'll make something similar, but not quite the same: cream of spaghetti squash. If you're in a habit of making many soups, and you're craving something a little more original than the regular squash, spaghetti squash soup will be fantastic for you!

That's exactly why I like it, as it's made just as I expect it'd be made. Ingredients are cooked, blended, enriched with heavy cream, and voila!

It also tastes just as I'd expect it to taste. Light spaghetti squash flavor enhances carrot and potato, but keeps the creaminess in tact. 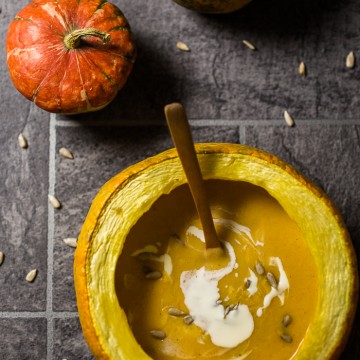 *The number and size of spaghetti squash you'll need will depend on whether you want to make edible bowls out of them, and how many bowls you'd like. If just one, then a 3 lbs squash will be enough. For more bowls get more squash. Clean them as you did the first one, but keep tops and bake them too.
Tried this recipe?Let us know how it was!
« No-Boil Lasagna Bechamel with Mushroom Bolognese
Ground Beef Phyllo Pie »