Stuffed zucchini: ground beef, rice and spices combined into perfect filling and baked in hollowed zucchini. Forget zucchini boats, these little zucchini cups are the new kids on the block!

When we think about which veggies to stuff, zucchini doesn’t come to mind as quickly as stuffed peppers. Shame, really. Zucchini is incredibly soft. Tender.

Peppers are tender too, yet I notice people often eat stuffing and leave peppers behind. Stuffing seems to be the central point of a stuffed pepper. Its wrapping paper.

Meanwhile, zucchini encases its stuffing and becomes its second skin. It reminds me of clay. Pliable, and not only does it keep form of any shape but add richness that can only come from something not overwhelmed with opulence of taste.

HOW TO CREATE STUFFED ZUCCHINI CUPS

Stuffed zucchini is prepared similarly to other stuffed vegetables and to some extent the dumplings. Instead of making zucchini boats, our family recipe calls for quartering zucchinis (or cutting them into thirds depending on their size) and then scooping out the core of each piece until it resembles a small coffee cup.

I call these zucchini cups.

Why not make zucchini boats instead? You can. It’s a matter of preference. I find as the size of stuffed vegetables decreases the taste increases. Especially since I usually bake most dolmas (stuffed veggies) instead of cooking them on stovetop.

HOW TO BAKE STUFFED ZUCCHINI

Smaller size allows stuffed zucchini to bathe in juices thoroughly. As you’ll see below in stuffed zucchini recipe instructions, level of the sauce reaches the tops of zucchini so the vegetable is moisturized from all sides.

If you’re not against using foil, I recommend covering the pan with it and making several little holes in it with a toothpick. This method essentially creates an environment similar to a bain marie (water bath) where the vegetables are at once baking, cooking and steaming. Small holes allow the steam to come out while most of hotness stays in the pan.

(And no need to cook rice ahead of time. Baking it gives it plenty of time to cook, expand and soften.)

Keep in mind deciding to go for this faux bain marie method to make stuffed zucchini doubles the cooking time. If you got better things to do there is no shame in popping them in the oven uncovered, and keeping an eye on the sauce level. In this case, replenish with water as necessary, and pour the sauce over zucchini tops to keep them from drying out.

Zucchini is done when you can cut it with ease with a fork.

HOW TO SERVE THESE

I like stuffed zucchini best served by itself, a slice of homemade bread and a heaping tablespoon of sour cream. Sour cream melts wonderfully into the stuffing adding touches of coolness and freshness. If you like a deeper flavor, try adding a dash of ajvar (ajver).

As you can imagine, a stuffed zucchini is a tiny energetic bomb of flavor and calories. There is the vegetable, then rice and meat seasoned generously, and finally the unforgettable nectar of the sauce.  You don’t have to add or subtract from a well-made stuffed zucchini.

This is why some feel sour cream and other sides take away from purity of stuffed veggies so they skip any and every add-on. Instead, they bask in what’s already there.

And that’s it. Perfection in one little cup. 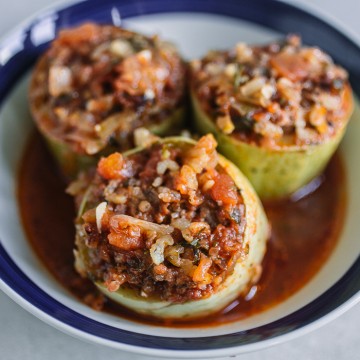 A round, 9-inch (23cm) diameter glass bakeware was used for this recipe. Foil adds moisture to baked zucchini. The dish is more flavorful this way, but it takes longer to bake. If you don't use foil, bake zucchini cups uncovered for 50-60 minutes. Check frequently and (carefully) pour liquid from the pan over them several times throughout baking, and replenish liquid level to prevent zucchini from drying out. As every oven is different you'll have to adjust the temperature accordingly.