Precise, simple recipe for rice as a side dish, they way it's done in the Balkans.

My History With Rice

I was a short, skinny kid with glasses. I hardly ate, except sweets. I had the worst first set of teeth. My favorite chocolate had rice in it. I can’t remember if it was Mikado, or some other one. But the rice grains were big, puffy, white, and chewy. Dad realized I'd eat the whole thing anytime a house guest gave me one to share with my brother and sister. The next time someone brought over a chocolate bar dad divided it into three parts. I got the smallest one.

To gain street cred, in high school we hung out with a former convict. In his defense, he looked the least convict-y convict of all convicts ever. Must have gone in for something small like making a threat. Or beating someone. He was also stubby and annoying and introduced us to sushi. But he gave us disgusting sushi from Shoppers. I never liked it. The rice was old and the fish stunk.

Many years after the war mom made rice again. It was soft and fluffy, yellow from the bouillon cube. A typically Balkan way of rice. It went great with schnitzels. I still tasted war in rice though.

In America no one really eats rice, except when eating Asian or Latin food. In the Balkans, people eat a lot of rice. Usually with meat. Always with bread.

In college, a bunch of us frequented a townhouse owned by a Japanese mafia guy.  He was generous. Had a kind smile, and bad teeth. Only pretty Japanese girls worked for him. On the top of townhouse was a karaoke bar. In the basement was a club. He designed it himself. It looked like an igloo that swallowed Jem. Sushi was sometimes served on naked, pretty Japanese girls. It was excellent sushi. It was excellent rice.

Back in the US, mom nursed a rich and ancient lady from Pakistan. Beebee knew one English world. “Srrolly” she’d say when they went for a walk if she thought mom was going fast. Beebee’s daughter in law made sweet Pakistani rice and taught mom to cook it. It took us a long time to like it. Now everyone in the family loves sweet saffron rice with nuts and raisins. Beebee is still alive today. She's between 104 and 110 years old.

During the paleo craze back in the day, I found an email to my roommate from a mutual friend. Email urged him not to let me sabotage his diet. I felt bad. To assuage guilt, I did paleo for three full days. On the third day I smelled like meat and hallucinated. In a vivid hallucination I ate fingers of my right hand. I let the rice crispies break up with paleo for me. Then I sabotaged my roommate.

A few weeks ago, I wanted to taste Balkan rice again. Fluffy, yellowish, separated rice. To put in a salad. To pair with a schnitzel. To cook in stuffed peppers. To know how to make it. I've forgiven it for being overbearing during war. I think we can be friends again. Water under the bridge.

P.S. Ground beef patties are excellent with rice. Veal, is also a good option! Homemade meatballs in creamy white sauce are my favorites to go with rice though! 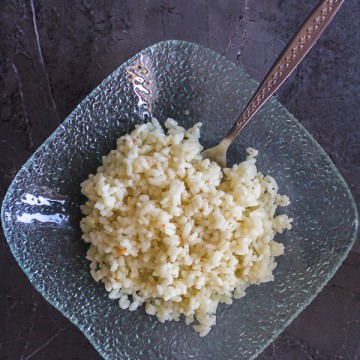 Tried this recipe?Let us know how it was!
« Knedle: Balkan Plum Dumplings
Boss Sauce: Mushroom and Veal Sauce »