Plums encased in a potato based dumpling dough, boiled and breaded. An old Balkan delicacy.

I’ve heard about Ksenija’s plum dumplings - known here as knedle - from my sister, but there was never a time to get together and make them. Sister said they were the best she’s ever had.

But one afternoon when plums were the right ripeness, Ksenija and sister came over for coffee plus a Balkan dumpling lesson.

Unusually unprepared, I asked Ksenija to stop by a grocery store before arriving and get the few remaining, albeit most important ingredients. Plums, for one.

Plums for knedle have to be on the smaller side, and completely ripe. When they are more close to red-purple than blue-purple, when they’re more squishy than hard, when they’re the size of a ping pong ball or smaller, that’s when they’re the  right plums for dumplings. As her family made plum dumplings for generations, Ksenija has an instinct for these, so I wanted her to pick them out.

Ksenija is a beautiful woman.

I know what you’ll say. Every woman is beautiful in her own way. True.

But only a handful of women in our lives are beautiful effortlessly. It’s purely a matter of nature, and there is nothing the rest of us can do but admire. Even the environment can’t diminish this kind of beauty. Not smoking. Not wars. Not life.

“I like interesting people,” Ksenija says. She enjoys an equally deep friendship with a cat lady  as she does with someone of a higher social standing, although she doesn’t give a sh*t about social standing. And there she is, standing in my kitchen now. I smugly think she must find me interesting too.

To be honest, it never occurred to me preparing these dumplings would be kind of like preparing the meat ones.  I can’t even remember having good plum dumplings before. Did I ever have them before?

I have a hard time recalling their taste because they’re incredibly hard to categorize. They’re sweet. So they’re a dessert. They’re also on the heavy side. As in, you’ll be pleasantly stuffed after consuming a few. Consuming a few more is overkill. (If you’re known to overdo dessert, go ahead, skip the main course. You won’t stay hungry.)

Come to find out, in Dubrovnik people eat knedle with sour cream on the side. This option sounds fantastic, and is way beyond a Sarajevo palate. People in Sarajevo are terrified of salt and sugar getting it on.

Probably why my efforts to introduce PB&J sandwich here failed.

Before sister and Ksenija arrived, I cooked potatoes in salt water (an equal mix of old and young ones as those were the only potatoes left in the grocery store), and mashed them without adding anything.

They were already cold by the time the two of them came, which is preferable anyway. I read another dumpling recipe that said it’s best if potatoes spend some time in the fridge mashed like that, before being made into dough.

Nothing else I read would have helped me make these dumplings on my own without her hands on instruction. Hopefully I broke the process down enough with the photos and description to dispel the dumpling enigma for you. Every step is included.

You know how I feel about folks who lie about ingredients to prevent others from replicating a dish so I’d never do that to you. Luckily, I’m surrounded by folks like Ksenija who not only teach me something new, but are also cool with me sharing this with you too.

We are now at the point where mashed potatoes are mixed vigorously with flour until they become one smooth, consistent ball of dough, which is then divided into two loaves. Each loaf is worked further, and cut into several one inch rounds.

Meanwhile, the plums are washed, dried, and pitted by making a swift cut on one side to let the pit out, while leaving each plum in tact.  Each plum is placed into a dough round, covered with a spoon of sugar, and rolled up into a golf ball sized dumpling.

By the way, you’ll need between 27-32 plums for the recipe. I can’t be more exact than that.

You can’t guess how willingly they’ll turn into dough. They may be dry and make the dough tough and sinewy. They may be wet and turn the dough into a squishy mush. You’ll have to balance out their personality with flour, just like when making bread. A little bit more flour to soak up the wetness. A little less flour if they’re naturally dry. Similar to making phyllo. You'll need a strong determination, just like when making ajvar (ajver).

As always when we get together, sister, Ksenija and I talk about all sorts of relationships. Multifaceted layers of connections with ourselves, lovers, friends and family. A complicated tug of war between what we need, think we need, and get. Inner and outer conflicts, with an occasional sweet release, that remain ever the same through time even as political systems change.

We plunk dumplings into boiling water and give them plenty of time to rise up. We do this a few times over until all the dumplings descend and then ascend. After that, Ksenija throws them in a pan with bread crumbs, and I take over and dip them in sugar.

Sister is the main tester. Sister says these are the best she’s ever had.

Plum dumplings come out transformed into brown compact balls. Sugar sparkles. They’re gorgeous to look at. When you take the accoutrements off a beautiful plum remains. The three of us agree we can’t be anything less than ourselves.

I feel a tug of thankfulness to have strong women around me.

P.S. What main course goes great with these? 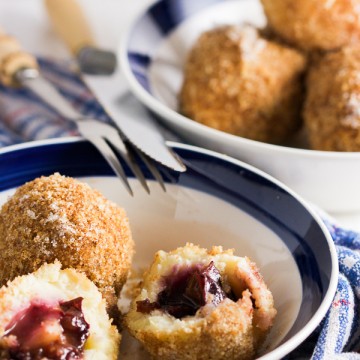 Preparation and cooking time isn't listed because it depends on several factors. For example, whether (cooked and mashed) potatoes are left in the fridge overnight, how long it takes one to make the dough, how big the boiling pot is (determines how many dumplings are in at any one time), etc. Each time will be a little shorter, but keep in mind that overall plum dumplings do take a considerable amount of time.
A serving size is about 2 dumplings, thus this amount of ingredients yields about 15 servings.
If you have some dough left over, you can form it into gnocchi (as the dough is pretty much the same), place in a freezing bag, freeze, and then make gnocchi later.
Since plum dumplings take time to make, you can double the ingredients and make a big batch and then freeze a portion. You freeze them after they're formed into dumplings, but before they're cooked. Once you're ready to make them, boil water, and throw them in frozen. Then follow the rest of the steps.

Tried this recipe?Let us know how it was!
« Jam Rolls
Rice »