Dagara is a straightforward lamb and veal stew. First seared on stovetop then baked in a clay pot infused with juices from several vegetables. Each layer of ingredients adds a new dimension to this traditional Balkan delicacy.

Dagara is not a dish for the weak-hearted.

It's a meat and veggie stew I didn't want to try at first. If you read the blog you'll know how unusual this is. I'm a lover of  soups and stews.

There is a marketing statistic claiming it takes us 5-7 times of hearing about (or seeing) something new to remember it. It seemed to work that way with me and dagara. I got hooked around the fifth time. It tastes fantastic. But the drama behind this dish? Even better!

If local folklore is to be believed, drama started near the town of Ključ. These best friends, Haso and Meho, grew up there. They did everything together and got along great. They even got married around the same time.

Real trouble started when Meho's wife cooked a seriously delicious (nameless) meal, and Haso asked for the recipe. Haso was hoping his wife too could make this soft, hearty stew sometime.

(The stew is made with two different types of meat, and usually these are the lamb and veal. They are topped with whatever veggies you have at hand, and the ones below are the typical sort: potatoes, Romano beans, carrots and such. The stew is good if you don't quite know what to do with either veal or lamb.)

This simple request triggered Meho to flip out. Years of resentment came the surface. He demanded Haso stop copying him in everything. First Haso stole Meho's poetry. Then Meho's style. Meho's way of life too. To top it off he now wanted his wife's delicious stew.

Haso was flabbergasted. Why would Meho, a friend so great he could not help but emulate, dish it out like that? Furious, he grabbed his wife and left, but not before wishing Meho would "only eat dagara with cows from this day on!"?

After he cooled off Meho tried to smooth things over with Haso. But Haso wouldn't hear of it.

Meho then started to fear Haso's curse. He even dreamt about eating dagara (whatever that was?) with cows. After a few days he confided in his wife.

This wise woman quickly solved the dilemma by naming her nameless meal dagara. This way Meho would still get to eat dagara, even if he did end up eating with the cows.

Meho did as his wife said.

What happened next? Did Meho end up eating with the cows? Did Haso lift the curse? Did they ever talk again?

In either case, we're left with this amazing lamb and veal stew. But if you know what happened next, leave a comment!

Dagara is served in small clay or ceramic bowls. It is also baked in a clay pot like the Bosnian pot stew was traditionally. (You can use glass bakeware if you - like almost everyone else - don't have a clay pot.)

Cover the pot cover completely during baking. Steam let out by vegetables on top creates a wonderful aroma and tenderizes meat until it achieves softest of its forms. 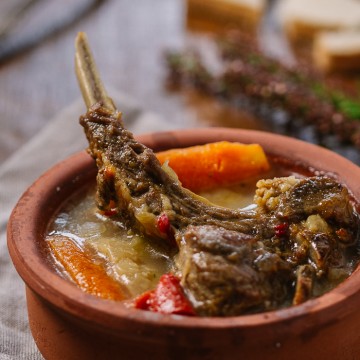 You'll have about 3 pounds of meat in total.