I'm usually not a fan of combining many flavors.

This may surprise you, but I also don't jump at the opportunity to try new food. When I was young I was such a picky eater, no one would have predicted I'd run a food blog. (That and you know, there was no internet when I was a young child.)

But recently mom made a few different types of energy-bar like bites. She didn't advertise them. Instead, she left them hanging out on her counter for a few hours.

A wise woman! She knew I'd eventually come snacking.

I tried them and loved them. Specifically, I loved these cornflake and puffed rice bites.

Could not be simpler to prepare too! (Such a plus, especially come December!)

Rice puffs and crushed caramelized sugar are combined with crushed cornflakes, and then the mass is divided in half. Each half is drenched in a different type of chocolate, mixed until integrated, formed into small bites, and set to stiffen for a few hours.

The result are these crunchy, (real) chocolate infused energy-bar inspired bites. I called them puffed rice and cornflake bites, but you can call them whatever you want.

I'm warning you though: these are not health bars! They're a dessert. A dessert so crunchy, and melt-in-your-mouth chocolate-y you'll eat ten before you realize it.

(If you're looking for a protein fix you're better off checking out the recipe index for protein bombs such as the veal roast or chicken liver sauce.)

You've been asking for more videos, and we've been obliging. When you get to our recipe index, each recipe that's been filmed has a "VIDEO" designation next to it.

Meanwhile, check out some of the food we're making in the upcoming week:

CRESCENTS - Simplest crescents filled with jam. Milk infused dough, rolled out and stuffed with a jam of your choice, then baked. A perfect way to treat your family on a Sunday morning. (Kiflice)

BALKAN LAMINGTONS (SCRUFFIES) - What brownies are to the English speaking world, are Coconut Chocolate Dessert Squares aka Scruffies (known as čupavci) to the people in Balkans, and are a form of Balkan Lamingtons. These busy, spongecake-like squares (first they swim in chocolate, and then drape themselves in coconut), are made in under an hour. And take even less time to eat. (Čupavci)

HASH BROWN PIE - If you love hash browns, you’ll adore this hash brown potato pie. Finished in 60-min or less, topped with sour cream and minced garlic, it’s a pie unlike any other! (Kljukuša)

CHEESY MEAT CASSEROLE - Meat and cheese pasta casserole: another in a series of one-pan, under an hour recipes. Chewy and soft, you get all the necessary ingredients in this one, your carbs and proteins. Just add a salad for some greens. (Zapečeni makaroni)

P.S. By the way, Aleksandra and I had the pleasure of meeting Marwah, BLB’s first, and possibly favorite, reader! She was lovelier than we could imagine. 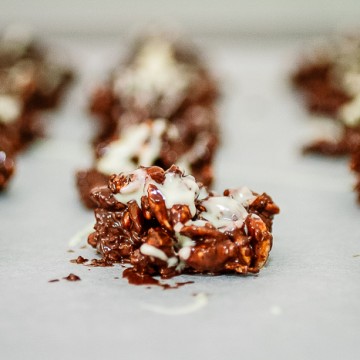 *If bain-marie is too complicated you can simply microwave the chocolate until it melts, or melt it over low temperature. Bain-marie prevents burning so it's preferable, however you do whatever is easier for you. **These are tasty! So, think about making two batches at once! VARIATIONS: Gluten-free: use gluten-free cornflakes, chocolate and puffed rice.