Some people have a talent for whipping up desserts from whatever they find in the pantry at a given moment. While my gifts lie elsewhere, luckily for all of us my niece is one of those people. She doesn’t make a lot of desserts. She’s interested in substance not form. But everything she whips up tastes great!

These chocolate pudding dessert cups are her invention.

Mind you, this isn’t a dessert you take over to impress your neighbors. Nah! This is the kind of dessert you reach for when you want a tub of ice-cream. Days when you need a pick-me-up. Days you really crave something sweet.

Cups are comprised of three scrumptious layers in between which is fruit. She usually uses bananas. Other fruit that works great are berries, kiwi and pineapple.

The bottom layer is a sturdy and semi-impermeable foundation made from cookie crumbs.

Which cookies should you use? Any cookies you want! Crumble them yourself or buy pre-crumbled ones. I recommend Petit Beurre, Graham Crackers or Plazma biscuits, if you can find them nearby. Otherwise the world is your oyster. Experiment! Any biscuit-like cookies work, but choose something plain. (This cup dessert pudding already has several sweet tastes going for it, keeping the crumbs simple assures these tastes won’t enmesh.)

Cookie crumbs are enriched with a few drops of vanilla.

(I wondered why vanilla always finds its way into desserts. We’re talking infinitesimal quantities, so why use it at all? The kitchn breaks it down; vanilla is to the sweet food is what salt is to the savory food, they say, vanilla enhances the flavor. Apparently vanilla is something you (only) need a drop of, lest you notice something’s missing.)

Milk is then added to fuse the crumbs together. (Can you use almond or soy milk? Why not!)  The result is a consistent wet-not-watery mass that will be your dessert’s bottom layer. It’s not as compact as the bottom layer of the biscuit cake from before. It’s more like wet sand. Soft, but it holds form.

Naturally, a sweet called ‘chocolate dessert pudding cup’ has to contain pudding. Chocolate pudding that is. Choose a regular pudding mix instead of instant pudding as recipe requires you to thin the pudding out. (When you warm the milk up, add more milk than you usually would.)

Pudding will thicken anyway, but you want it to be thinner than it naturally is. Why? You’ll prepare the pudding first, so you want to keep it smooth while you make the other two layers. You’ll add the pudding to cups easier this way.

The third and final layer is the chocolate. Melt some baking or dark chocolate (or substitute with chocolate chips) in some milk. Once they integrate you’ll add heavy cream. What you’ll end up with is smooth warm chocolate liquid that will perfectly top fruit and the layers that came before it.

Choose big, wide cups to layer. Think 10 oz or more. If you have tall, thin cups you can layer ingredients twice (layer the crumbs only once, on the bottom). Let your imagination take over as this truly is a laid back dessert.

Cool it down if you can wait. I like it warm! 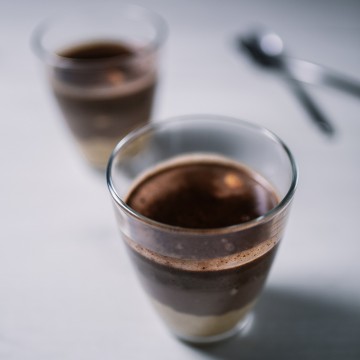 *Substitutes: berries, kiwi and pineapple; vanilla extract with rum. **Pudding is supposed to be thinner than usual