Tasty quince dessert (slatko od dunja) made by poaching quinces until perfect reduction and softness of fruit are achieved. The resulting dessert (a condiment too!) is best described as quinces in simple syrup. Similar to Turkish ayva tatlisi, and Italian frutta sciroppata, this dessert sauce is great by itself or as a topping.

There was a time when upon opening a wardrobe or glancing at a window seal, your eyes were met with an object so yellow and aromatic it pulled you straight into now. The past was spent, and future delegated to some other latitude while you stood face to face with the misshapen apple, the yellowest of pears, mysterious and sweet smelling quince.

Today we are taking that quince for consumption. The recipe isn't new but taste is altogether different.

If you came across the strawberry sweet sauce I use to gorge on, you've an idea what this quince dessert (slatko od dunja) is about.

Preparation is similar for these two. As is the degree of difficulty in naming them in English. They lack a point of comparison.

There is no batch of desserts I could tack them onto, nor a word precise enough to describe them. (The closest I can do is to get you to think of it as a rich man’s version of canned fruit, if canned fruit was harder and sweeter, and the sauce was thicker and also sweeter.)

Original name for this type of dessert is slatko, meaning sweet. 'Slatko' is an adjective except in this case when it transforms into a noun. Slatko od jagoda translates to 'the strawberry sweet;' slatko od dunja, 'the quince sweet.'

But how do I name our slatko od dunja in English? I wanted to be more precise than calling it the quince sweet.

Since days of the strawberry sauce, sugar - that demon! - has for better or worse, also been demonized.

In this sugar-vary environment, how do I write about, or name the dessert based heavily on simple syrup, even when it's made with something as beautiful, as aromatic, and as culturally significant to the Balkans (and especially Bosnia), as a quince?

I went with the poached quince dessert. Think of it as a Balkan version of the Italian frutta sciroppata or Turkish ayva tatlisi. 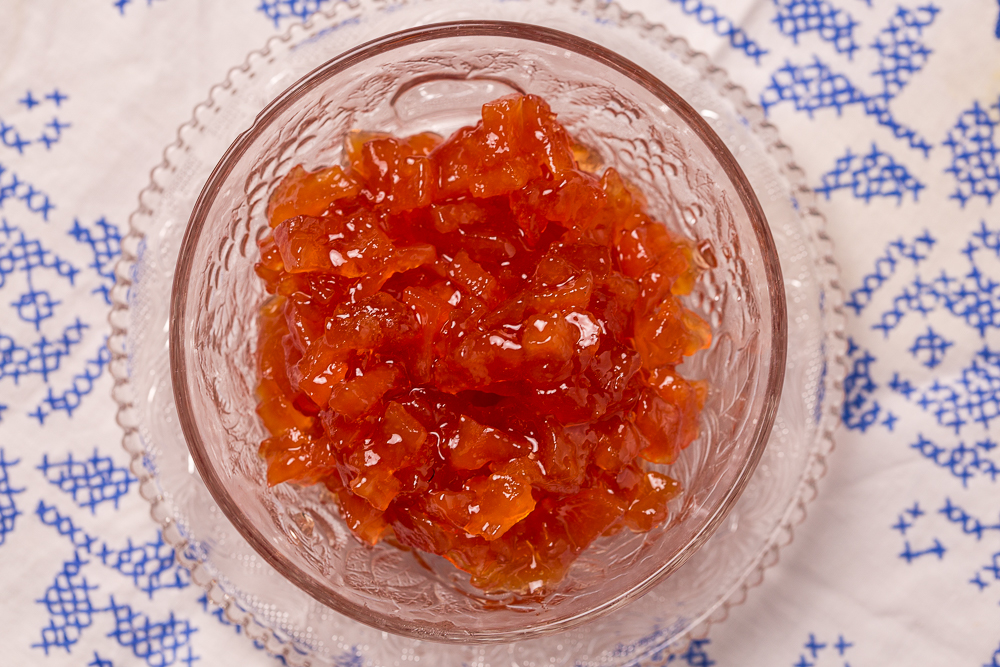 Ottomans brought the quince to the Balkans. Immediately upon coming here the quince took on a romantic hue. It grabbed a hold on lore and music, and achieved solid cultural significance.

There is something about the quince. Heavy. Hard. Tart. Beautiful. It doesn't like that you try to consume it raw. You may want to, but even when ripe it tastes unripe. You might handle a slice or two, but it’ll never let you finish it whole.

Regrettably, people consume less of them today than ever before. For the generation of our grandmothers it was unthinkable not to have a few young quinces strategically placed around home from where they'd expel their magical aroma as they ripened.

Meanwhile, we love the idea of the quince, but only the idea. Give us something easy to make, we say.

Back in the day when you visited a friend or a neighbor in Serbia the first thing they brought you was a small bowl of poached quinces in simple syrup, along a glass of water.

I thought about the meaning behind this kind gesture and distances come to mind. If you lived in a village then, it was a trek to reach your neighbor’s house. Quince syrup offered a perfectly timed sugar jolt to revive your energy until dinner.

HOW TO MAKE THE POACHED QUINCE DESSERT

When you head over to the market to get the quinces (sometime between October and December, during their season), always get one or two more than you think you’ll need.

Core it and peel like you would an apple. But be careful! It’s tough. (Imagine peeling a watermelon.) There is no use being speedy lest you cut your finger. The quince will not let you handle it absentmindedly.

This quince recipe is even simpler than the strawberry syrup as there is no marinating.

But it’s helpful if you get a large pot with water with sugar and lemon ready before you start peeling. Quinces brown easily. The best way to prevent this is to either smear pieces with lemon juice, or to drop them into the pot, right as you’re cutting them.

As mentioned we mostly prepared the strawberry syrup in my family. Grandmother loved strawberries, and she was the one who prepared it for dessert, and as a condiment for winter. (Quince dessert is equally good for conserving. Method is the same - just get more quinces, sterilize jars, and make a larger batch.)

But when I was testing the recipe for quince dessert, suddenly the old and tried recipe seemed basic. So I overcomplicated it. I first made the simple syrup, then added the quinces in. This resulted in quinces remaining hard while the syrup turned to something you'd use for hair removal. Lesson? Simple does it!

Quinces don’t have to fall apart, but the pieces do need to soften the way we need that aroma of theirs. If you don't like chunks, grate them.

It couldn’t be easier from here.

Bring to a boil on medium, and then lower the heat. Simmer for an hour or so, removing the foam that forms on top. You won’t be able to remove all of it as the syrup frequently bubbles up. Get as much as you can and don’t worry about the rest.

Cooking may take you an hour or an hour and fifteen minutes. Rely more on the spoon than the clock. You’re looking for the moment when, upon drawing a line on the bottom of the pot with your spoon, the quince syrup separates easily.

As they cook, quinces will change their color to dark orange (burgundy almost). Forty-ish minutes in, the aroma will intoxicate you.

If you want a thinner syrup consistency, use more water and grate quinces. This is a better method if you plan to conserve them. 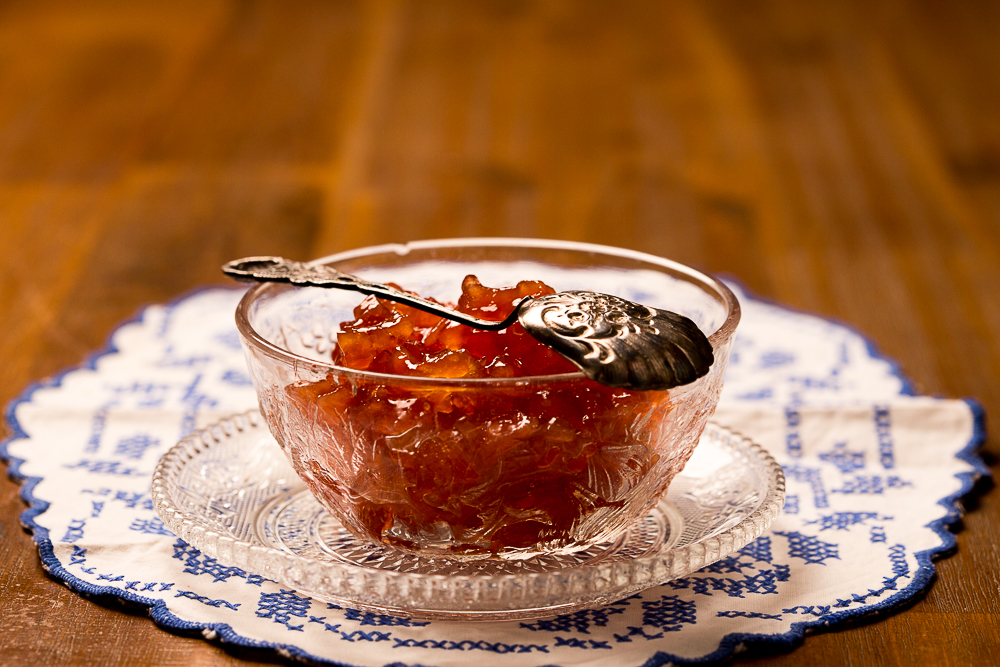 There are a few other quince delicacies.

Embarrassingly, I didn’t know about kitnikez until last year when mom brought me some. I kept it outside the fridge for a few hours. Not knowing exactly what it was - I thought mom was joking when she pronounced the dessert, as it sounds funny - and being vary of new things (a terrible trait for a food blogger!), I discarded it.

Only later did I find out my ignorance cost me something splendid. 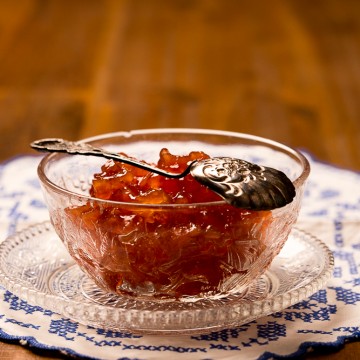 *You're better off trusting your spoon than the clock here. As soon as you can draw a line on the bottom of the pot and it separates nicely the dessert is finished.  If you like it less thick, you can turn it off sooner, or use a little more water than recommended. **The syrup will bubble up frequently. Remove as much foam as you can and don't worry about the rest. Unopened jars of quince dessert will last a few months in a dark, cool place. Once you open a jar, transfer it to the fridge.
Tried this recipe?Let us know how it was!
« Veal Shank Roast (Teleća Koljenica)
Chocolate Orange Cake with Meringue (Vasina Torta) »