Dark chocolate orange cake with meringue and ganache, also known as Vaso’s cake or Vaso’s torte (Vasina torta) is the best Serbian traditional cake. The cake boasts three layers: a nut-based crust, a chocolate and orange topping, and a topping made entirely out of meringue. (Plus it's topped with more chocolate!) Drooling yet?

Most desserts in the Balkan region are old-fashioned. They require ingredients that were once pricey. (Think eggs, walnuts, butter, et al.)

A lot was at stake, so people judged desserts on their quality. And quality meant rich, filling, and aesthetically pleasing... all at once.

I can almost guarantee that it'll become a regular on your Holiday dessert table!

(Btw, a torte is a just type of cake with a few layers. Please note that the terms torte and cake are used interchangeably in the text.)

Why You'll Love This Cake

What's unusual about this chocolate orange cake is that there is only one cake (crust) layer. (Most cakes have on average 2-3 crust parts for layering.) This layer is made with eggs (separately mixed), ground walnuts, sugar, and grated baking chocolate. It's very similar to the cakes we've done before.

The foundation of this second layer is the sugar syrup and walnuts, eggs, and chocolate. But it's the freshly squeezed orange juice mixed with orange zest (which helps turn the flavor citrus-y), that gives this cake that wow factor.

Classic Italian meringue forms the third layer of our chocolate orange cake. You may remember that what makes this meringue different is the addition of sugar syrup to egg whites whipped into soft peaks.

If meringue scares you I found a website with great tutorials for every kind of meringue you can imagine. I find it helpful to think about it this way: at its most basic, meringue is just egg whites, a pinch of salt, and a mixer.

Most people use a portion of the meringue to plaster cake sides with a nice snowy finish. But my source, Jelena, insists this chocolate orange cake was best when the fourth and final layer was made entirely of dark chocolate, for the Jaffa effect.

(Jaffa is a type of cookie biscuit topped with (artificial) oranges and chocolate.) Chocolate is poured on top of the cake and left to drizzle on the sides, leaving a perfect window into layers one, two, and three. It's pure magic!

Get a Baking Buddy! Even if you are an experienced baker, give yourself at least three hours the first time you make this orange chocolate cake. (No worries, the layers don't take an hour each. It's just that there are waiting periods in between.)

Don't Skip the Wait! The first cake layer needs some time to cool off after baking. Parallel to that, it's best if you leave the orange layer in the fridge for 30-45 minutes. You'll have an easier time spreading it over the cake layer after it's toughened. Also, these two should really integrate in the fridge together for at least an hour or two before you make the meringue.

Practice Restraint! I found this chocolate orange cake tastes best a couple of days after you make it. If unable to wait that long (who has the time?), at least promise me you'll give it a solid "sleepover" in the fridge. You must!

We can't know for sure how much of this story is fiction and how much isn't, but I'd like to think it's all a true story. I’ve picked up the pieces via several online sources, so forgive me if I don’t get all the details right.

At the beginning of the 20th century there lived (in a small Serbian town of Paraćin), a handsome man named Vaso Čokrljan. A longtime bachelor, Vaso's marital status was for many years the main topic of town gossip.

What a surprise it was to everyone to hear that at the tender age of 41 Vaso finally married! The lucky lady in question was Jelena, who'd later describe Vaso as gentlest and kindest of husbands.

When Jelena was pregnant with their child, local doctors informed them she probably wouldn’t survive giving birth. Vaso was devastated.

Sparing no expense he traveled to Vienna with Jelena so she could see the best specialists. Both Jelena and their baby girl survived.

After recovering in Vienna, they returned to Paraćin. To celebrate their triumphant return, Vaso’s mother-in-law organized a huge celebration. She made many regional delicacies, but the main attraction became a special cake she created in honor of her son-in-law.

This three-layered cake boasted the best region had to offer (different types of nuts, meringue, and eggs), and was paired together with a citrus orange flavor. These ingredients (oranges especially), were expensive and difficult to procure, so this wasn’t a cake just anyone could whip up.

And that's how we got today’s chocolate orange cake.

I drew inspiration from two sources for today's Vaso's Torte:

2. Jelena from Food for Thought: Jelena is a Belgrade food blogger (she's not Vaso's Jelena!), and her website is called Food for Thought. Unfortunately, she seems to have stopped blogging circa 2015. Her posts are translated into English, so you can browse her recipe index. Phenomenal food! (Jelena, if you read this post at some point thank you for your blog, for your detailed and patient way of responding, and for the treasure of knowledge you shared!)

If you make today's Chocolate Orange Cake with Ganache and Meringue and like it, please consider leaving a ⭐️⭐️⭐️⭐️⭐️ (5-star) rating. This will help others find the recipe more easily! 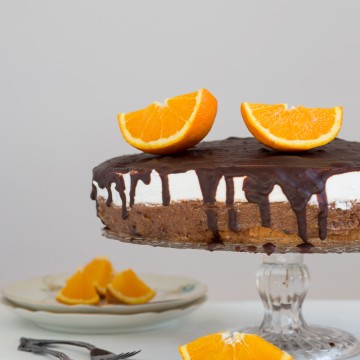 This recipe heavily relied on Vaso’s cake recipes by Jelena from food for thought food blog as well as The Big National Cookbook (a classic Yugoslavian cookbook). My gratitude goes out to both! Layer 1

Take eggs out of the fridge 1-2 hours ahead so they’re at room temperature once you start baking. It’s good to have more eggs on hand than you expect you’ll need, accidents happen. Separate egg yolks from egg whites as precisely as you can. If some egg white ends up in egg yolk section it’s no big deal, however if you get any yolks in egg whites remove them as much as possible. Otherwise  you’re better off using new egg whites. Wash your mixer rotating parts and cake ring (pan) after each use as you’ll use them for several steps and they need to be completely clean for each. Toothipick test: stab the cake several times in different places with a toothpick. If it comes out clean, the cake is done. Otherwise, if the toothpick has crumbs on it, bake a few minutes longer then repeat the test. To prevent burning, place parchment paper on top of the cake. Layer 2 The volume of fresh orange juice will depends on how much you like orange and dark chocolate flavor combo. Bain marie is a method by which you’re cooking ingredients on steam heat. This method is excellent for killing bacteria while still allowing ingredients to keep a smooth consistency. Keep stirring egg yolks quickly and swiftly otherwise they have a potential to overcook and become an omelette. All the “fancy” equipment you’ll need for a water bath are a pot for boiling the water and a mixing bowl (preferably a metal one) whose bottom partially fits into the pot. Fill the pot one third of the way with water and bring to a boil. Place the mixing bowl inside so the least amount of steam escapes. Some people allow the bottom of the mixing bowl to hit the water, while others don’t. I’ve tried both ways and prefer the method where there is a little bit of a distance. Layer 3 Please note I don’t use bain marie for egg whites, but this is my choice. Egg whites are generally not a good growing ground for salmonella, plus I’ve never had a problem with it before. However, I understand you may want to protect yourself in the slightest possibility of contamination. I get you. In this case, create a bain marie the same way as you did for layer 2 egg whites. Be careful and steady the bowl in the pot (wear a mitten or use a kitchen towel to protect your fingers) while beating egg whites. When you start adding in sugar syrup you’ll have to either turn off mixer several times while you add it in, or use the hand that was steadying the pan and bowl to add the syrup in. Do it slowly and you’ll be ok. Layer 4 In absence of a strong plastic bag (it has to be strong, lest it falls apart), use a small dish with a pour spout for pouring chocolate. By the way anything will work, from džezva (Balkan coffee dish) to a sauce bowl. Some only use baking chocolate and heavy cream (50-50) to make the glaze. Whatever you decide, test it ahead for consistency. Cake For best taste leave the cake in the fridge overnight. It’s even better if you can hold off 24 hours before eating it. The cake lasts up to 7 days in the fridge. As per Jelena, when cutting it run your knife under hot water first.
Tried this recipe?Let us know how it was!
« Poached Quince Dessert (Slatko od Dunja)
Russian Salad or Salad Olivier »