We make a lot of veal in the winter, and this veal shank roast (koljenica) is often on our dinner table. Soft, succulent fore shank meat has a deep, satisfying, hearty flavor you’ll want to eat for days in a row.

Every large meal gathering in our extended family is accompanied by a succulent, large roast.

We’re not original in this way. A good roast brings up memories for most people. Families around the world gather at the dining room table, at least during the holidays. Turkey, beef or chicken matters little. It’s about that sit down, about conversation and good food.

And about waiting for the designated carver who has the most important job.

(This is usually the most senior male in the family. It's the same across continents. Is it a patriarchal hand me down from an earlier era? Or a conciliatory prize for the man as the woman chose the right cut, marinated that sucker and roasted it to perfection?)

Wrong piece can start a war.

Roast for me brings up images of a hefty cherry wood, oval, dining room table covered with a snow white, crisp tablecloth with a few embroidered details in blue or pink. Table is set with china and silk napkins, which are surrounded by crystal glasses and much cutlery. The throne of the table is in the middle, where a large pan rests  enclosed by tens of bowls and plates filled with different sides. In the pan is a luscious veal roast which any meat aficionado would admire with devotion reserved for fetishes.

You see, there is something grown up - a very satisfying feeling - about knowing how to make a perfect roast. And I'll teach you how.

What is veal shank?

Shank is the portion of a cow’s leg between the knee and where the limb attaches to the body. (Look at the red areas in the diagram below.)

This positioning is what gives shank its name in Bosnian (Croatian/ Serbian); shank is known as koljenica (koljeno being the knee). Therefore koljenica (or shank) refers to the area around the knee.

When it comes to veal, medallions and under the shoulder blade are generally the most popular cuts.

Medallions top the list due to their tenderness. A well made veal medallion will evoke meat cravings you've never had in your life. Under the shoulder blade (veal) is also well respected as it's a solid piece of meat for roast and is comparable to any good beef cut.

Veal shank often gets shafted in the process, not because of the taste, but because most people don't know how to prepare it well.

There are two types of shanks: fore and hind.

If you take a look at the photo below (marinated shank in the pan), you’ll see what veal shank looks like uncooked. However, imagine it in one thick, long piece that's not been cut.

Veal shank is shaped kind of like a sensual thigh. Thick on top, thinning out as it reaches bottom. A bone runs through the entire piece.

The shank is pink in color with some redder areas inside the cut, and white areas where the fats and bone are. In color it is similar to the pork shank. However, you can differentiate these two by shape. Pork shank is short and stocky, while veal shank is elongated.

Veal shank weighs between 3 and 6 pounds (from 1.5 to 3kg). Make note of how much your shank weighs as the weight is a deciding factor in roasting length.

What dishes can you make with this meat?

While veal shank is not traditional to American cuisine, this cut is well known and frequently prepared internationally. Three famous veal shank dishes come to us from Italy, the Philippines and the Balkans.

How to make bone broth?

Bone broth made from veal shank is considered a delicacy and medicine. (Think chicken broth on steroids.)

A delicacy because it is flavorful and versatile. In taste, veal bone broth is stronger than chicken soup, but not so strong to leave you with a “I’ve just been punched in the stomach” feeling some broths do. In fact, this clear broth is light enough to leave its mark on cooking (as a foundation for soups, stews and rice), while it doesn’t overpower.

And it's considered medicine because the marrow is a great source of protein and nutrients. It's high in collagen, vitamins and minerals. Bone marrow is also said to be helpful in healing everything from cold to osteoarthritis.

In the Balkans bone broth, and especially veal shank bone broth (temeljac od koljenice), is widely used in cooking in an effort to strengthen the immune system. Mothers of young children swear by it. They use bone broth as a base for most food they prepare for their kids. (My father, who was a surgeon, used to urge me to eat it: "Aida, if you'd only eat more of this. You have no idea how good it is for a woman's health.")

All of us from my sister, mom, to my grandmothers have been brought up on bone broth. It's quite possible bone broth is the reason I was able to survive malnutrition that came later, during the war years (when I was 9, 10), and escape relatively unaffected by it.

*While some advocate longer simmer times, I make mine in about 3 hours. You can go as long as 12. However, the longer you go, the more intense the taste. This means longer cooking times will later require you to water down the broth before using it.

Please that: if you are making broth, use a brand new shank, not the leftovers. (Do not use leftover bones for bone broth, or cook the broth and then try to roast it.)

This recipe for veal shank starts with a good, long marinade.

If you're a marinade expert you're welcome to experiment. But I went the classic Balkan marinade route: spices, mustard and oil. The best method is if you rub these generously into the meat. (Shank should almost be divided in 4-5 pieces, but not all the way through, as you can see on photo above.) Afterwards, wrap meat in saran wrap and leave it in the fridge overnight.

The following day transfer the shank into a well-oiled roasting pan and cover it with foil. Pierce foil with a toothpick or fork in several places so some of the heat can escape during roasting. Throw the pan into a  super hot oven. You'll roast it on 480°F (250°C) until the last 15-20 minutes when you'll take the foil off and lower.

To achieve the right, fall of the bone effect, any type of veal roast should be roasted based on its weight. The formula is the same as for the regular veal roast: 1 hour of roasting per 2 lbs (1kg) of meat. (For example, if you have 3 lbs of meat you'll roast it for 1.5 hours.) If you roast your meat based on this formula you'll never again have to fear veal that's overly done, or not done enough.

Halfway through the roasting take the pan out and carefully remove the foil. Flip the meat around, pour the juices that are in the pan over it, cover with foil again and return to oven. Continue roasting, but remember to take the foil off for the last 15 minutes of roasting and to lower the temperature to 390°F (200°C). This will form that perfectly juicy yet crispy skin.

In the end, it doesn't matter how you decide to consume it. What you'll find is that even if you're ordinarily not a meat person you'll like the taste of veal shank. 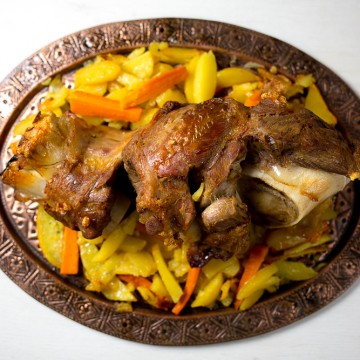 Leave meat leftovers in fridge. Veal is even better the next day, cold, with a little bit of salt on top. Make sure to note weight of your veal shank so you can easily determine roasting length. Remember to marinade meat the night before.
Tried this recipe?Let us know how it was!
« Hazelnut Chocolate Balls (Truffles)
Poached Quince Dessert (Slatko od Dunja) »