A friend recently told me he paid $10 for two pounds of apples. He works for the UN in Africa. When he returns to work from a vacation back home, instead of clothes he brings suitcases full of Granny Smiths.

Meanwhile, my fruit bowl overflows with fruit most of which meets its natural demise before I remember to eat it.

This never happens at my mom's house. If she hasn't consumed it, as soon as she sees fruit approaching ripeness she thinks of a way to use it. Getting back to apples, there are always some of them laying around. And so there is always an apple dessert somewhere around the house. My favorite is the apple crumb pie.

Do I need to know why and how croissants come to be as flaky and soft as snowflakes? Do I need to know how macaroons get that slight crunch while still melting in your mouth? I'm sure butter and eggs have something to do with it, but I don't need to know. I don't want to feel cheated with its simplicity.

Except, sometimes I do.

Sure, after we leave the domain of childhood there is only so much magic left in the world. So we like to travel and discover it in different cultures. Then we realize they're much like us. They like good food. They want to accomplish something. They want to hug their mom every once in a while.

That's still magic, right? Even the uncovered trick doesn't make it less mesmerizing once you do it yourself.

And of course, there is the obviousness of running a blog where my job is to tell you the secrets of one or the other dish. So, really, how can I talk about keeping a secret secret?

I like to think of this space as a scrapbook. There is a little bit of everything, but mostly about food. And I'm a recipe collector, terrified to let things to to the domain of the forgotten. And thus jumps from Africa to Copperfield, back to apples.

In magic revealing fashion, here we go. There are several parts to this dessert.

There is the buttery, egg yolky, dough that half of which goes on as the bottom layer. Then there are the apples. Sweet, squeezed, grated apples. And on top of them there are beat egg whites combined with what else, but walnuts. And jam. Top, fourth layer is made by grating remaining half of the dough over everything.

But it's as far from dry as you can imagine, and it requires no simple syrup. The apple sweats, moistening the middle of the cake, while egg whites and walnuts combine for the easy, light, fluffy layer before the final, grated round of dough.

I can't say enough great things about this cake. It requires some effort, yes, but the final product is worthy of any pastry shop. Golden yellow, soft with a light crunch, rich. It keeps well for a few days in the fridge. If it's too much of a good thing for you, you can mellow the richness with vanilla ice cream, or whipped-cream.

Word of advice: I wouldn't serve it to guests because you'll be jealous they're consuming all your hard work. 🙂 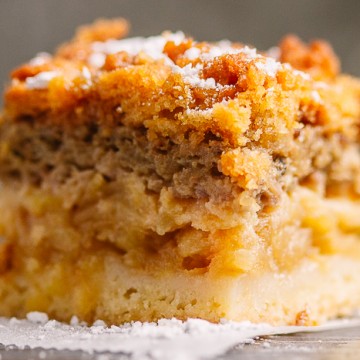 Tried this recipe?Let us know how it was!
« Baked Sauerkraut (Podvarak)
Braided Sweet Bread (Slatka Pletenica) »