Satarash: fast and furious four ingredient Balkan vegetable stir fry. Eggs are optional, but recommended. Satarash stir fry is a wholesome breakfast, and a great side too.

WHAT IS SATARASH, AKA BALKAN STIR FRY?

Satarash doesn’t perfectly fit the description of what’s traditionally defined as a stir fry: ingredients fried in super hot oil, over super high heat.  But I ran into the same problem I often run into when translating recipes: the word satarash hasn’t really been translated before.

In these cases I have two choices:

2. Look for a similar recipe with similar ingredients.

Leaving recipe name unchanged usually means the dish won’t cross your radar. I’ve tested this several times. The only Balkan dishes you recognize are the familiar ones like baklava and burek. Everything else might as well be invisible. Even if the dish is exactly what you’re looking for, unless its name alludes to something you’ve eaten or heard of before, you won’t detect it.

So I’ve learned to give in and choose option 2.  Satarash, which includes working a few vegetables on stovetop, most closely resembles stir fry. And so the name was born. (Other good options included menemen which is basically a Turkish satarash, as well as shakshouka, a Middle Eastern version of the same.)

Now that you’re aware of the similarities between Balkan and Asian stir frys, let’s go over points of separation. Particularly heat and texture.

Traditional stir fry involves very high heat. Satarash, however, lingers between medium to medium high. The difference in heat accounts for the difference in texture. Satarash vegetables that are more soft and chewy than crisp and crunchy. Also, there is a bit more sauce in satarash, sometimes even more than a bit of sauce depending how you prefer it.

(While we are at it, although wok is not widely used in the Balkans, if you have it pull it out! Satarash is easier to make in a wok than pan.)

Basic version of Balkan satarash includes onions, peppers (red, yellow and green bell peppers work great), and a tomato or two. As usual the spices are few (salt and pepper), mild and added to taste.

If you’re feeling adventurous (and you consume these) add a bit of vegeta or a vegetable bouillon. If you want to experiment further with herbs and spices, may I suggest paprika, parsley and cumin? Start small and see where taste leads you.

The addition of eggs makes this stir fry into a protein packed breakfast, so I decided to upgrade the dish. (Not an egg person? Want more sauce? Skip them! Or try our risotto satarash.) Eggs soak up the moisture and you almost end up with a tasty omelette.

OH THOSE SIDE DISHES!

As I browsed the site’s menu, I realized that side dish section is skinny. It begs the question whether Balkan cuisine supports side dishes.

It does. Can we talk about how delicious  breaded and baked zucchini, Macedonian baked beans, baked sauerkraut, and sautéed spinach are?

The challenge is that Balkan side dishes are so rich they might as well be the main course. Although many assured me it wasn’t so (“it’s meatless!” they said), today’s Balkan stir fry is a complete meal to me.

It’s so delicious I ate several pans’ worth just while trying to shoot them on separate occasions. The final time I photographed satarash I had to load up on ingredients in case I ate the whole thing again before capturing it on camera.

Which brings me to grocery stores.

Although proliferation of the huge supermarket is alive and well in Sarajevo, most of the streets have their own bodegas. We call them granap (singular). Granaps vary from street to street. Some only sell bread and a few other items, but most have a large and – usually an unusual – inventory. They do have one in common, a large amount of nicknacks. Someone must be buying these otherwise why would they carry them, right?

A tradition here is that the youngest family member is expected to go to granap to pick up bread, pastries and cigarettes. They get a tote bag, about ten bucks (which at at that age instantly transforms one into Bill Gates), and a nickname granapche.  Balkan parents are smart. They wrap up what’s essentially a responsibility, and make it seem as if it were the penultimate achievement in one’s life to go pick up stuff for them every morning.

I’d know, as for years I was granapche in our family.

When I analyze some things in my life, my grandfather used the same tactic when he inspired me run errands for him. First he told me in a solemn voice that I was his secretary.

He depended on me so much, he said, without me the mission (what mission?) would fail.I carried out my responsibilities, important tasks such as walking envelopes to the post office, with overkill, you’d think I was the U.S. Secretary of State.

My household is a family of just me now so by proxy I’m still a granapche. As I am one of those irregularities in nature known as the early riser, I actually like going to the store at the crack of dawn. It’s a small meditation, a small leg stretch before a stretch of work.

Granap on my street is unsightly and dark. The staff rearrange shelves all the time, but (if) you can find anything from spices to USBs there.

The staff are mercurial. One day they’ll treat you like a queen. The next day they’ll curse you out between the teeth, letting you know you made their day worse just by coming to buy something from their store.

The customer is always right adage means nothing in the Balkans. In fact, in most establishments the staff are annoyed to see you. When it comes to not giving a shit, NYC and Paris have nothing on Sarajevo.

Yet, it’s these simple things that make my day here.This granap down the street. This unwillingness to conform. This Balkan stubbornness. There is a certain freshness to hear someone’s opinion.

Perhaps that’s the way people are equal here. Maybe not in social status. Maybe not in connection. But everyone, from a taxi driver to the minister (and sometimes they’re both in one), will have an opinion. Sometimes wrong. Often very wrong. Yet you’ll know exactly where they stand, and where you stand.

Give me blunt disdain over fake niceness any day. It heals the soul. 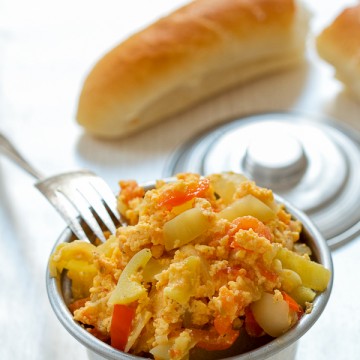 Simmering time is approximated. It may take a little more or less. If not using water, stir more frequently and cook on lower heat to avoid vegetables burning. Nutritional information is based on 4 people. If making this as a side dish, it serves about 4. If it's the main meal, it serves about 3 people.